HomeGroupsTalkExploreZeitgeist
This site uses cookies to deliver our services, improve performance, for analytics, and (if not signed in) for advertising. By using LibraryThing you acknowledge that you have read and understand our Terms of Service and Privacy Policy. Your use of the site and services is subject to these policies and terms.
Liz1564 Profile Books Charts & Graphs Reviews Gallery 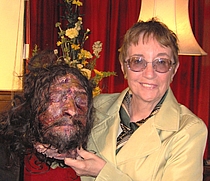 About meI was born in the ice age. I taught high school English in the Chicago public schools and, in a effort to escape, I also wrote bodice rippers in the 1980's.

After four books, I realized I could make more money bagging at the local supermarket as a second job, so I stopped writing professionally. I'm a decent writer, but not a driven writer, and I had to force myself to sit at the typewriter after school. I realized that I would much rather read than write.

After a bout with breast cancer (15 years cancer free!!!), I decided to take early retirement from teaching.

My husband took me to London for the first time in 1968. He figured he would shut me up because all I talked about the first year we were married was going to England. London in 1968! WOW! We stayed at Hadden Hall B and B, right around the corner from the British Museum for 3.50 pounds, including full, English breakfast. We saw Vanessa Redgrave live at the Shaw Theatre for one pound and then saw her film Mary Queen of Scots for 1.50 pounds! Our first Shakespeare was the RSC's Much Ado About Nothing with Alan Howard and Janet Suzman. Helen Mirran played Hero and two minor actors named Patrick Steward and Ben Kingsley played
Conrad and Borachio.

We are native Chicagoans who had short stays in New Mexico and Virginia. As far as NM is concerned, you either love the desert or you hate it. There is no middle ground. We did not fall into the love category. Williamsburg VA is breathtaking. I urge anyone who can, to visit. The spring is a magic kingdom. Every twig in the woods seems to sprout flowers.

We moved back to Chicago in the spring of 2005 and have a condo on Lake Shore Drive by Navy Pier. On July 3, 2005, I was in Millenium Park and the orchestra was rehearsing the Independence Day program so I sat down to listen. Part of the program was Copeland's A Lincoln Portrait. Our recented elected junior senator was reading Lincoln's words to me and about five other people in the audience. At the end of the rehearsal he asked the six of us if he came across okay. So I was able to tell Barak Obama that he had great stage presence!

About my libraryAt one time I had over 10,000 books. I am a compulsive list maker and if I liked an author I had to have every book by said author. So I had every Agatha Christie, Patricia Allingham, J. J. Marric, Charles Dickens, Barbara Tuchman.

After moving four times, I have cut the down to probably 2000 books. (Ha! It is growing again!) I have a bookcase of medieval history; one of British history from the Conquest to the present; one of Roman history; s bookcase of Bloomsbury authors; lots of art and folklore books.

My fiction library is pretty much literature as opposed to pop fiction. If I want to read a best seller (Drood, for example) I now get it from the library. I used to devour mysteries like popcorn, but that part of my reading life seems to have ended and I now concentrate on the classics like Austen, Dickens, James, Waugh, Huxley etc. I stopped reading Twain but cannot yet part with my collection of his books. I joined Library Thing because of my interest (obsession?) with the green covered Virago Modern Classics.

Last year I decided to read or reread all the Pulitzer Prize novels and completed the first 20 award winners. Unfortunately, so many of them were really lousey that I have slowed down my goal. My next read on the list is Grapes of Wrath. This will be a very good reread.

I don't ever plan to die. There are too many books to read to leave this life.