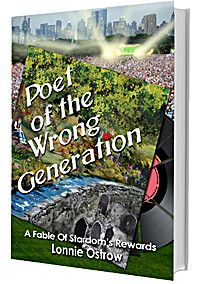 About meMy name is Lonnie Ostrow. I have been an innovator, storyteller, promoter and celebrity-insider for more than two decades. Since 2001, I have been the publicity/marketing director & researcher for the iconic best-selling novelist Barbara T. Bradford. I also serve as an editorial and marketing consultant for a collection of first-time authors through The Editorial Department. Previously I worked as a PR executive, promoting an assortment of first-time celebrity authors including Ray Manzarek of The Doors. From 1995 - 2001, I was widely credited with inventing the "living celebrity postal phenomenon." In all, I have worked with more than 40 legendary personalities from Bob Dylan to the Bee Gees, Sylvester Stallone to Jackie Chan, creating high-profile media events to celebrate their postal recognition by an assortment of foreign nations.

I am excited to share that I have my first book coming out on November 10 2016 called Poet Of The Wrong Generation. With Poet of the Wrong Generation I am hoping to have combined all my unique experiences to bring you a novel of love & betrayal, music & fanfare, downfall & redemption -- a fable of stardom's rewards, set in New York City during the 1990s.

About my library“It’s not that I don’t love you, and my tears are yet to dry.
But you can’t go back and forth forever and we’ve already said goodbye.”

Through these words, a young poet unearths his musical soul while severing ties with the woman he loves after her stunning betrayal. Unknowingly, in writing this ballad of liberation, he will soon evolve as one of the fastest rising stars on the pop music landscape.

The year is 1991; the place, New York City. Here we meet Johnny Elias, a college student from Brooklyn with boundless adoration for two things in life: timeless popular music, and the heart of a sweet, complicated young woman who is clearly out of his league.

Megan Price not only is the object of Johnny’s affection, but also the only daughter of New York’s most powerful PR woman: the indomitable Katherine Price.

Projecting that her daughter’s boyfriend will never live up to the family standard, Katherine cleverly perpetrates a series of duplicitous schemes to rid Johnny from her high-class world. But in her callous disregard, she inadvertently sets him on a determined course to his improbable musical destiny - while sending her own daughter spiraling down a path of despair.

Poet of the Wrong Generation tells the symmetrical story of a lovable underdog and his meteoric rise to stardom, his humiliating downfall and his unprecedented attempt to reclaim his place as the unlikely musical spokesman for his generation. At the heart of Poet is a tale of star-crossed lovers and their struggle with unforeseen success and disillusionment, in an attempt to rediscover lasting harmony.

Uniquely integrating a variety of original song compositions, Poet projects the epic clash between true contentment and the fable of stardom’s rewards; a nostalgic journey through the major events of the 1990s, with a cherished cast of characters and a stunningly unpredictable conclusion.
Audio soundtrack of the original music from Poet Of The Wrong Generation can be heard on the author website, LonnieOstrow.com.