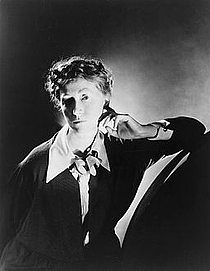 Real Name
Marianne Moore
About My Library
My personal library is held at the Rosenbach Museum and Library in Philadelphia, PA as part of the Marianne Moore Collection. The books in this LibraryThing Legacy Library were exported from the Rosenbach's catalog, Rosy. Not all of my books may yet be cataloged in Rosy.
About Me
"Born near St. Louis, Missouri, on November 15, 1887, Marianne Moore was raised in the home of her grandfather, a Presbyterian pastor. After her grandfather’s death, in 1894, Moore and her family stayed with other relatives, and in 1896 they moved to Carlisle, Pennsylvania. She attended Bryn Mawr College and received her BA in 1909. Following graduation, Moore studied typing at Carlisle Commercial College, and from 1911 to 1915 she was employed as a school teacher at the Carlisle Indian School. In 1918, Moore and her mother moved to New York City, and in 1921, she became an assistant at the New York Public Library. She began to meet other poets, such as William Carlos Williams and Wallace Stevens, and to contribute to the Dial, a prestigious literary magazine. She served as acting editor of the Dial from 1925 to 1929. Along with the work of such other members of the Imagist movement as Ezra Pound, Williams, and H. D., Moore’s poems were published in The Egoist, an English magazine, beginning in 1915. In 1921, H. D. published Moore’s first book, Poems (The Egoist Press, 1921), without her knowledge.

Moore was widely recognized for her work; among her many honors were the Bollingen prize, the National Book Award, and the Pulitzer Prize. She wrote with the freedom characteristic of the other modernist poets, often incorporating quotes from other sources into the text, yet her use of language was always extraordinarily condensed and precise, capable of suggesting a variety of ideas and associations within a single, compact image. In his 1925 essay “Marianne Moore," William Carlos Williams wrote about Moore’s signature mode, the vastness of the particular: “So that in looking at some apparently small object, one feels the swirl of great events.” She was particularly fond of animals, and much of her imagery is drawn from the natural world. She was also a great fan of professional baseball and an admirer of Muhammed Ali, for whom she wrote the liner notes to his record, I Am the Greatest! Deeply attached to her mother, she lived with her until Mrs. Moore’s death in 1947. Marianne Moore died in New York City on February 5, 1972."