HomeGroupsTalkExploreZeitgeist
This site uses cookies to deliver our services, improve performance, for analytics, and (if not signed in) for advertising. By using LibraryThing you acknowledge that you have read and understand our Terms of Service and Privacy Policy. Your use of the site and services is subject to these policies and terms.
MatthiasCorvinus Profile Books Charts & Graphs Reviews Gallery 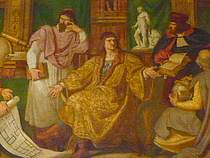 About meMatthias Corvinus was elected king of Hungary in 1458 and ruled until his death in 1490. He launched numerous military campaigns in central Europe that achieved only limited results. However, his success in consolidating his reign, subordinating the noble factions, imposing legal reforms and sponsoring intellectual activity at court led to enduring popularity as 'Matthias the Just'.

About my libraryMatthias Corvinus was educated in the spirit of Renaissance humanism. His library, the Bibliotheca Corviniana, became one of Europe's greatest collections of secular works, especially works of science, history and philosophy. The leading scholar on the Bibliotheca Corviniana, Csaba Csapodi, estimates a collection of 2,000-2,500 volumes, making it one of the largest libraries in medieval Europe.

Corvinus's successors gave away many of the manuscripts in the collection and almost all of those that remained were looted by the Ottoman army in the sixteenth century. However, more than 200 are known to be extant today.

This catalogue is based on the bibliographical details provided in 'The Raven King: Matthias Corvinus and the fate of his lost library' by Marcus Tanner (Yale University Press, 2009).