HomeGroupsTalkExploreZeitgeist
This site uses cookies to deliver our services, improve performance, for analytics, and (if not signed in) for advertising. By using LibraryThing you acknowledge that you have read and understand our Terms of Service and Privacy Policy. Your use of the site and services is subject to these policies and terms.
PeiTeHurinuiJones Profile Books Charts & Graphs Reviews 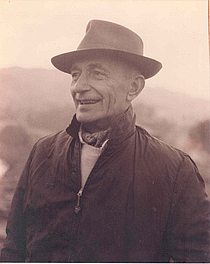 About mePei te Hurinui Jones (1898-1976) was renowned as a Māori scholar and writer. He was also a Ngāti Maniapoto leader, interpreter, land officer, translator, genealogist and a JP.

Whakapapa
Pei te Hurinui Jones was born on 9 September 1898 at Harataunga (Kennedys Bay) on the Coromandel Peninsula. He was the son of Daniel Lewis, a European storekeeper, and Paretekorae Poutama of Ngāti Maniapoto. Pei was adopted by his mother's grand-uncle, Te Hurinui Te Wano, after his father left New Zealand. Paretekorae then married David Jones and her children took their stepfather's name. His only formal education occurred from 1913 when he was enrolled at Wesley College in Auckland.

Research, Writings, etc
Pei te Hurinui Jones was a skilled translator and he edited and translated into English three volumes of Māori chants and song-poetry Nga Moteatea (his most valuable contribution to Māori literature according to Bruce Biggs). He also translated three of Shakespeare’s plays (The Merchant of Venice, Julius Caesar and Othello) into Māori as well as Edward Fitzgerald's Rubaiyat of Omar Khayyam. His own writings include King Potatau, Mahinarangi and Puhiwahine and many booklets that commemorated the opening of Tainui and Ngāti Tūwharetoa meeting houses.

Pei te Hurinui Jones was made a member of the Order of the British Empire (OBE) in 1961. The University of Waikato conferred an honorary doctorate upon him in 1968. He married twice. His first wife was a widow, Hepina Te Miha, whom he married in 1943. They had no offspring of their own but adopted several children of relatives. Hepina died in 1956, and in 1958 Pei married Kate Huia Apatari. He died at Taumarunui on 7 May 1976.

Quotes about him
Apirana Ngata writing about the young people of Ngāti Maniapoto in 1928 – “The torch-bearer will I think be Pei Jones - a good man, with plenty of vision, a first-rate Māori scholar, steeped in West Coast folk lore etc. and a very competent master of English... And he has the fire that kindles hearts.” (Letter to Peter Buck) Na To Hoa Aroha: from your dear friend. The correspondence between Sir Apirana Ngata and Sir Peter Buck, 1925-50, edited by M.P.K. Sorrenson. Vol. 1. Auckland, Auckland University Press, 1986.

About my libraryThe University of Waikato holds the book collection of Pei te Hurinui Jones and many of his manuscripts. The first instalment of his papers were deposited with the University Library in 1990 and a professional archivist arranged them in 1991. When a further collection of Pei’s papers along with his book collection and many taonga were deposited in 2003 an experienced highly regarded specialist Māori curator of Ngāti Tūwharetoa descent Rangiiria Hedley was appointed on contract to undertake to arrange, describe and preserve the collection.

A room was set aside (dedicated) to house the collection, and named He Mahi Māreikura. It was blessed by the Tainui elder John Haunui and was opened by Te Arikinui Te Atairangikaahu in July 2004.

A Deed of Custodial Gift-Whakaaetanga ā pukapuka mō Te Tiaki i te Takoha was drawn up after extensive consultation and signed at the opening by the donor Brian Jones (Pei’s son), Bryan Gould and their respective witnesses.

The purpose and hope of Brian Jones and his whanau for this collection is that it be used and shared by as many as possible so that his late father's work can be of value for current and future research by all iwi and all peoples.