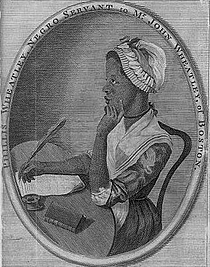 During her youth Phillis seems to have had free access to the library of her enslaver, John Wheatley, and likely to other Boston libraries as well. In the ~1771 "Conversation between a New York Gentleman & Phillis" (the manuscript of which is at the Congregational Library in London), Phillis answers questions about her reading:

"Q: What put you upon writing poetry?
A: Reading Rosamond, a play which was in verse, Sir.
Q: Did you ever read Cato a play?
A: I have Sir.
Q: How did you like it?
A: like it very well.
Q: What Authors have you, as Ovid, Horace, Virgil, &c.?
A: No other Sir than Pope's Homer.
Q: Did you ever read Pope's own Works?
A: I have seen the first Volume of his Works, his Juvenile Poems.
Q: How did you like them?
A: Very well Sir.
Q: But Phillis, what makes you write more upon Religious Subjects than others?
A: I prefer them Sir.
Q: How wou'd you like a Subject best, in Prose or Verse?
A: If it be a good subject 'tis all the same, but I prefer the Verse.
Q: The Verse suits you best then?
A: it does Sir.
Q: Do you read the Bible Phillis?
A: I do Sir.
Q: Which do you think the best, the old or the New Testament?
A: The new Sir, however they are the same only as the old foretold what should come to pass in order to fulfill it, namely the coming of the Messiah.
Q: Do you read the new Testament more than the old?
A: I do Sir.
Q: Are you fond of reading the Bible?
A: I am Sir.
Q: Can you sing Phillis?
A: No, Sir."

During her visit to London in 1773 she was presented with several books and given money with which to purchase others, as she recounts in a 18 October 1773 letter to David Wooster: "The Earl of Dartmouth made me a Compliment of 5 Guineas, and desir'd me to get the whole of Mr. Pope's Works, as the best he could recommend to my perusal, this I did, also got Hudibrass, Don Quixot, & Gay's Fables -- was presented with a Folio Edition of Milton's Paradise Lost, printed on a Silver Type, so call'd from its elegance, (I suppose) By Mr. Brook Watson Mercht. whose Coat of Arms is prefix'd."

When Phillis' husband John Peters died in 1801, his estate included "13 Book & 1 Bibel," valued at $10. Some of these may have been Phillis' books; John Peters is also believed to have sold certain volumes from her library after her death, to pay his debts. Some of these ended up in the collection of Salem's Pickman family, and through them have come down to various libraries.

Additional information about books from Phillis Wheatley's library is welcomed.

Questions? Comments? Concerns? Do you know of additional books which should be included here? Please contact Libraries of Early America coordinator Jeremy Dibbell.
About Me
Phillis Wheatley Peters (~1753 - 5 December 1784), African-American poet. Brought as an enslaved child to Boston in July 1761, Phillis was purchased by John and Susanna Wheatley. Tutored by the Wheatley's daughter Mary, Phillis quickly became familiar with modern and classical literature, religion, and history, and by 1765 she was composing poetry. Her first published poem appeared in a Newport, RI newspaper in 1767, and by 1772 the Wheatleys sought a publisher for a volume of Phillis' poetry. Boston did not yield enough subscriber support, but London's Archibald Bell agreed to publish the poems, which appeared in 1773 as Poems on Various Subjects, Religious and Moral. This volume was the first published book by an African-American, and just the second by an American woman.

Phillis traveled to London in June, 1773, where she met various dignitaries (though not her patron, the Countess of Huntingdon), visited the British Museum and the Tower of London, and arranged for her manumission upon her return to Boston. She was officially freed sometime in the fall of 1773, but remained with the Wheatley family, first with John Wheatley in Boston, then with Mary and her husband John Lathrop in Providence during the British occupation of Boston. By December 1776 she had returned to Boston.

Phillis married John Peters, a free black man, in 1778; the couple may have had children, but this has not been confirmed. Phillis sought a publisher in Boston for a second volume of poems, but was not successful.

PhillisWheatley added:
The beauties of the English stage: consisting of the most affecting and sentimental passages, ... in the English plays, ancient and modern. ... The third edition, ... In three volumes.

PhillisWheatley added:
The works of Virgil : containing his Pastorals, Georgies, and Aeneis by Virgil

PhillisWheatley added:
The Odes, Epodes, and Carmen seculare of Horace by Horace