HomeGroupsTalkExploreZeitgeist
This site uses cookies to deliver our services, improve performance, for analytics, and (if not signed in) for advertising. By using LibraryThing you acknowledge that you have read and understand our Terms of Service and Privacy Policy. Your use of the site and services is subject to these policies and terms.
RobertTreatPaine Profile Books Charts & Graphs Reviews Gallery 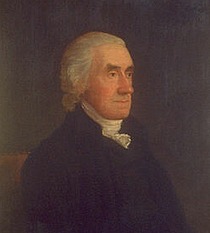 About meRobert Treat Paine (11 March 1731 - 11 May 1814), Massaschusetts statesman, lawyer, and judge. A signer of the Declaration of Independence.

Paine was born at Boston, the son of Rev. Thomas and Eunice (Treat) Paine. He was educated at Boston Latin School and Harvard College (class of 1749). Following his time at Harvard he briefly taught school at Lunenberg, MA, then worked as a merchant, taking several voyages abroad. Following a stint as an army chaplain in the mid-1750s, Paine took up legal studies under Benjamin Prat.

Admitted to the bar in 1757, Paine took up the practice of law (at what is now Portland, ME, and at Taunton, MA), and was appointed a justice of the peace in 1763. He held various local offices in Taunton, and was elected to represent the town in the state legislature beginning in 1773.

Paine represented the prosecution during the Boston Massacre trials in 1770, and was named a delegate to the First and Second Continental Congresses (serving 1774-1778). He returned to the state legislature in 1777 (becoming speaker pro tem), but took up the duties of Attorney General the same year. In that capacity he managed the state's handling of Tory estates, the Shays' Rebellion prosecutions, and various other matters. Paine also served as a member of the state executive council (1779), and sat on the committee to draft the 1780 constitution. He was named an associate justice of the Massachusetts Supreme Judicial Court in 1790, and served until 1804.

Religiously, Paine began as a Congregationalist, shifting to Unitarianism in his later years.

About my libraryPaine's library is documented in the "Catalogue of Books beloging to Robt. Treat Paine," in the Robert Treat Paine papers at the Massachusetts Historical Society. The catalog takes two forms: the first, begun in 1768, lists books strictly by format; in the second iteration of the catalog, a rearrangement made in 1805, Paine organizes the books by subject, and by format within those headings.

The tags used in this collection reflect the subject headings and formats given by Paine in the catalog, with the exception of the Navigation tag; Paine does not include his navigation books in the 1805 catalog (whether he had not retained them or they were excluded for some other reason is unknown).

Some of the books passed to RTP's daughter Mary, whose husband Elisha Clap willed to her "one half of the library of her late father" in 1830. Her estate inventory of 1842 refers to proceeds of RTP's library, amounting to $194.30. A nephew, Charles Cushing Paine, received some of the family books, noting those with RTP provenance in his 1850 book catalog. Those so marked have been noted here. Also included from CCP's catalog are a list of "Pamphlets from the Library of Grandfather R.T.P." Those have been tagged "Pamphlet."

At the end of his catalog, Robert Treat Paine includes a record of books lent and to whom. These records are noted in the Comments field for each relevant title.