HomeGroupsTalkExploreZeitgeist
SantaThing signup ends Monday at 12pm Eastern US. Check it out!
dismiss
This site uses cookies to deliver our services, improve performance, for analytics, and (if not signed in) for advertising. By using LibraryThing you acknowledge that you have read and understand our Terms of Service and Privacy Policy. Your use of the site and services is subject to these policies and terms.
SharonMariaBidwell Profile Books Charts & Graphs Reviews 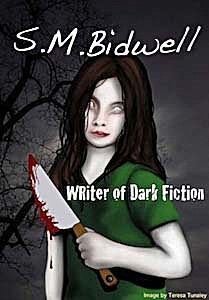 About meDuring Sharon’s writing career she’s lived in a house with a Harry Potter cupboard under the stairs, shared a publisher with the creator of Roger Rabbit, and has taken a trip to Jupiter. Only one of these has been in her imagination.

The first short story she submitted — Silver Apples of the Moon — was accepted by Roadworks Magazine. The editor announced her as “a writer who is going places” and described the story as having “both a Sci-fi and horror element,” and being “strong on characterisation, and quite literary, in terms of style.” Subsequently, she was approached to write all reports and publicity material, including a piece for translation into Braille for The Really Wild Nursery and Arthritis Care Breaking Down the Barriers garden project, which took place at the Malvern Spring Show.

Since then, her work has appeared steadily in both print and electronic publications, such as Midnight Street, Aoife’s Kiss (Sam’s Dot Publishing), Night To Dawn, and Radgepacket (Byker Books). Her short story — Bitter and Intoxicating — was snapped up for inclusion in the anthology Red Velvet and Absinthe. This compilation, edited by Mitzi Szereto with a foreword by Kelly Armstrong, was designed to evoke the romantic ethos of classic Gothic fiction with a serving of eroticism. With a repertoire of twisted tales and a love of cross-genre writing, it surprised everyone (including herself) when she branched out into erotic romance. These works have been critically acclaimed and often described as ‘deeply passionate’.

Sharon’s worlds are vivid, unexpected and sometimes intensely magical. Sharon writes whatever her warped mind can come up with and is quite capable of writing something darker, grittier, and even outright twisted. Though her love for all things Myth and Legend has led her to write under more than one name, from 2019 she's using S.M.Bidwell for her Dark Fiction.

She was propelled into the Steampunk universe of Space, 1899 and beyond, winning approval of series creator and award-winning game designer, Frank Chadwick, with three books, one of which was co-authored with editor (and writer) Andy Frankham-Allen, and subsequently led to her writing for the Lethbridge-Stewart series, and a short audio story for Doctor Who, performed by Katy Manning.

About my libraryEclectic. I've many books still to list, but it'll grow increasingly varied. I've heard an author should state what he or she reads but I'm not sure my choices help much as an indication of what I write. I've also included books that I've acquired at every stage in my life. You'll find books from my childhood and some are so old I can't find them listed so have had to choose an updated listing. EG: Tom Sawyer -- mine is old, curling at the corners in a plain red cover from award books. Any book I've kept is because I loved it, or I admire most of the work from that author, or I remember reading them at a certain time in my life and they're connected with a time frame or specific memory so have sentimental value, although if that were true...hell, move me into a very large library and be done with it.

I've not rated many of the books on here because my own personal rating system would probably drag many good books down in the ratings. For me 3 stars is a good read, 4 above average, and 5 is for exceptional books. At the other end of the scale, I'd probably rate 2 as worth a look and 1 as a no, or only if desperate but then I don't tend to keep many of those as they take up precious space. I've also many unread books angrily ruffling their pages at me.