HomeGroupsTalkMoreZeitgeist
This site uses cookies to deliver our services, improve performance, for analytics, and (if not signed in) for advertising. By using LibraryThing you acknowledge that you have read and understand our Terms of Service and Privacy Policy. Your use of the site and services is subject to these policies and terms.
StephenHopkins Profile Books Charts & Graphs Reviews 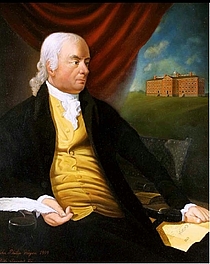 About meStephen Hopkins (7 March 1707 - 13 July 1785), Rhode Island statesman and Signer of the Declaration of Independence.

In 1742 Hopkins moved to Providence, to engage more deeply with shipbuilding activities he had undertaken with his brother Esek, and with a smelting operation. He resumed office as a representative in the general assembly (now for Providence) in 1744, serving for the next decade (including as Speaker). Simultaneously from 1747-1749 and 1751 he sat on the state superior court.

In two 1764 pamphlets (An Essay on the Trade of the Northern Colonies and Rights of the Colonies Examined), Hopkins argued that Parliament's power over the colonies did not extend into internal affairs.

Hopkins again set in the general assembly from 1771 through 1776, while also serving as chief justice. In 1774 he was a delegate to the First Continental Congress, and again represented the colony at the Second. Hopkins served as chair of the naval and marine committees, and sat on the committee which drafted the Articles of Confederation. He left Congress in September 1776, returned to the general assembly until 1779, and then retired.

Among his political activities, Hopkins also found time for intellectual pursuits; he was among the founders of the Providence Library and the Providence Gazette and Country Journal, a patriot newspaper. He was a member of the Philosophical Society of Newport. In 1764 he was named the first chancellor of Rhode Island College (now Brown University).

About my libraryHopkins' library is as documented in the inventory of his estate, taken 13 August 1785, on file at the Providence City Archives. Hopkins does not specifically mention books in his will (dated 20 May 1781).