HomeGroupsTalkExploreZeitgeist
This site uses cookies to deliver our services, improve performance, for analytics, and (if not signed in) for advertising. By using LibraryThing you acknowledge that you have read and understand our Terms of Service and Privacy Policy. Your use of the site and services is subject to these policies and terms.
SylviaE Profile Books Charts & Graphs Reviews Gallery 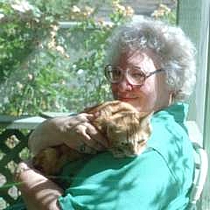 My Newbery Honor book Enchantress from the Stars is the only one that was not updated in its new hardcover edition (although its 2018 paperback and ebook editioms were updated to remove gender-specific language). The Far Side of Evil and JoUrney Between Worlds have had significant updating, and today's readers should not read the old editions of those two. (For more information, see my website, which also has detailed FAQs about all my novels.)

The trilogy Children of the Star consists of the three novels This Star Shall Abide (aka Heritage of the Star), Beyond the Tomorrow Mountains, and The Doors of the Universe, originally published separately but now available only in omnibus form since it's all one long story. Though it was written for readers of high school age, the new edition, published by Meisha Merlin in 2000, was issued as adult science fiction. (All copies of that edition are now gone, and a new edition with identical text is available.)

In 2012 I reissued an updated edition of my nonfiction book The Planet-Girded Suns, now re-subtitled The Long History of Belief in Exoplanets. Though the original edition was published as a Young Adult book, it wasn't meant for readers below high school age and the new edition has formal source citations and some additional material, so it has been issued as adult nonfiction.

For for some years I worked as a freelance editor of nonfiction anthologies for high schools, thus most of the nonfiction books listed under my name are those I've edited. I didn't write them; I merely chose material on the assigned topics and wrote the introductions. (The purpose of these books was to present a variety of views on controversial issues impartially, so they do not reveal my personal opinions.)

My main interest, apart from writing books, is the vital importance of space colonization, which I believe is necessary to the long-term survival of humankind. I write about that at my website, and I also created the page Space Quotes to Ponder which contains over a hundred quotations from well-known people and a few other writers (mostly from books) about why expansion of our civilization into space is essential.

About my librarySome years ago I finished entering the books I planned to catalog. I've bought only ebooks since, as print is very hard on my eyes; but I never got around to cataloging many of those. In 2017 I became physically disabled and had to move to a care facility; all my physical books were donated to the Friends of the Library at that time. I still read ebooks but I am no longer active at this site.

I do actively maintain my own website, which contains many of my essays as well as detailed information about my novels. I hope readers interested in my work will visit it.