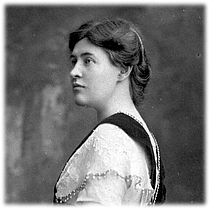 Real Name
Willa Cather
About My Library
Over the years since Cather's death, books from her personal library have found their way into a number of public, academic, and personal collections. Please bear with us as we locate and record the books in Willa Cather's personal library.

"She bought Stevenson's complete works, the first large set acquired, paying for it at the rate of a dollar a month. At the time of her death the 'Stevenson' occupied a shelf conveniently accessible to casual reading in the living-room of her apartment. Like the rest of the reading that was important to her as an undergraduate, it was important to the end."
About Me
Born: December 7, 1873, Back Creek, Virginia
Died: April 24, 1947, New York City
Buried: Jaffrey, New Hampshire

Born in western Virginia in 1873, Willa Cather spent the first nine years of her life on her family's Shenandoah Valley farm. After a series of financial setbacks, Willa Cather's parents sold the Virginia farm and headed west to join family members, who had set up homesteads on the Nebraska prairie. That journey, by train and by overland wagon, made such a strong impression on the young Willa that 35 years later she based the train journey of Jim Burden, the narrator of her fourth novel, My Antonia, on it.

In an interview in the Omaha Daily Bee, October 29, 1921, the novelist recalled the shock of Nebraska:

"This country was mostly wild pasture and as naked as the back of your hand. I was little and homesick and lonely and my mother was homesick and nobody paid any attention to us. So the country and I had it out together and by the end of the first autumn, that shaggy grass country had gripped me with a passion I have never been able to shake. It has been the happiness and the curse of my life."

It has also been the setting of six of Willa Cather's twelve novels and of many of her short stories.

In 1890, Cather enrolled in Lincoln State University (now the University of Nebraska) in Lincoln, Nebraska. While attending the university, she helped support herself by working as a journalist. It was also during these years that she began writing and publishing short stories.

Cather graduated in 1895, and after an anxious six months at home in Red Cloud, found a job editing a magazine in Pittsburgh, Pennsylvania. Her Pittsburgh sojourn lasted 10 years, during which time she worked as a journalist, editor, free-lance writer, and high school teacher. In 1905, The Troll Garden, her first collection of short stories, was published; the following year, she moved to New York City where she worked for six years as the managing editor of McClure's Magazine.

In 1922, Willa Cather won the Pulitzer Prize for Literature for her novel One of Ours, and in 1933, she was awarded the prestigious French literary award, the Prix Fémina Américain. In 1944, the American Academy of Arts and Letters presented her with its Gold Medal.

Although Willa Cather died in 1947, her novels and short stories continue to serve as anchors of courage and inspiration for her readers. In that fiction, she covers a wide range of subjects: the immigrant experience, the development of the artist, the life and times of a small town, the hardships and rewards of farm life, and the challenges of a religious life --- to name but a few. In her writing she transports the reader to many places, including the Nebraska prairie, turn-of-the century Pittsburgh, Chicago and New York City, the World War I battlefields of France, 17th century Quebec, and the mid-nineteenth century missions of the Southwest. To study the life, works, and times of Willa Cather is to explore the American continent and experience of the past two centuries. ~Written by NSP

Note on the Cather image shown on this page
This image has been cropped from a larger, full-length photographic portrait, which was taken in the early 20th century at the Fifth Avenue studio of photographer Aime Dupont. The current owner of this photograph has granted permission for its use here.

WillaCatherLibrary added:
The Well-Beloved: a Sketch of a Temperament by Thomas Hardy