HomeGroupsTalkExploreZeitgeist
This site uses cookies to deliver our services, improve performance, for analytics, and (if not signed in) for advertising. By using LibraryThing you acknowledge that you have read and understand our Terms of Service and Privacy Policy. Your use of the site and services is subject to these policies and terms.
cannellfan Profile Books Charts & Graphs Reviews Gallery 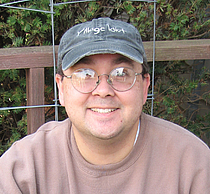 About my libraryI'm adding all of my books somewhat piecemeal. I've got piles of them, and boxes of them, throughout my home, many hidden behind piles and boxes of other things. I'm going to enter every last book that I've collected, although as I'm going through them I'm finding many that I no longer wish to keep. Those, I'm releasing through my BookCrossing account. So...not everything you'll see on my LT shelf is actually still owned by me! After I've entered in all the books I still own physically -- and I'm about 90% done with that -- I'm going to go back and try to enter in all the books I've ever read in the past, as far as I can recall. I'll also try to scan and add covers for any books I've got copies of that there are no covers listed -- these I'll tag with "coverscan", in case you're interested!

Currently readingWild Seed by Octavia Butler
The Left Hand of Darkness by Ursula K. Le Guin
Lord of Light by Roger Zelazny
Her Smoke Rose Up Forever by Jr. Tiptree, James
The Man with the Strange Head and Other Early Science Fiction Stories (Bison Frontiers of Imagination) by Miles J. Breuer
The First Time I Got Paid For It : Writers' Tales From The Hollywood Trenches by Laura J. Shapiro
Time and Again by Jack Finney
Nightmare At 20,000 Feet: Horror Stories By Richard Matheson by Richard Matheson
In Pursuit of the Proper Sinner by Elizabeth George
Timescape by Gregory Benford
No Plot? No Problem!: A Low-Stress, High-Velocity Guide to Writing a Novel in 30 Days by Chris Baty
Shadow Show: All-New Stories in Celebration of Ray Bradbury by Sam Weller
253: A Novel by Geoff Ryman
Existence by David Brin
Truth in Comedy: The Manual for Improvisation by Charna Halpern
Foxglove Summer: A Rivers of London Novel by Ben Aaronovitch
The Fifty-Year Mission: The Complete, Uncensored, Unauthorized Oral History of Star Trek: The First 25 Years by Edward Gross
The Big Book of Christmas Mysteries (Vintage Crime/Black Lizard) by Otto Penzler
A Fire Upon The Deep by Vernor Vinge
The New Complete Guitarist by Richard Chapman
The Mousetrap and Other Plays by Agatha Christie
Shutter Island by Dennis Lehane
Transcendental (The Transcendental Machine) by James Gunn
Teach Yourself VISUALLY Guitar by Charles Kim
Where Late The Sweet Birds Sang by Kate Wilhelm
Geek Wisdom by Stephen H. Segal
The Secret Life of the American Musical: How Broadway Shows Are Built by Jack Viertel
Hercule Poirot: The Complete Short Stories: A Hercule Poirot Collection with Foreword by Charles Todd (Hercule Poirot Mysteries) by Agatha Christie
Stories of Your Life and Others by Ted Chiang
The Poacher's Son: A Novel (Mike Bowditch Mysteries) by Paul Doiron
Soldier of the Mist by Gene Wolfe
Curtain Up: Agatha Christie: A Life in Theatre by Julius Green
The Dry: A Novel by Jane Harper
Killers of the Flower Moon: The Osage Murders and the Birth of the FBI by David Grann
Unnatural Issue: An Elemental Masters Novel (Elemental Masters, Book 6) by Mercedes Lackey
Robicheaux: A Novel (Dave Robicheaux) by James Lee Burke
Ties of Power (Trade Pact Universe) by Julie E. Czerneda
Alfred's Teach Yourself to Play Guitar: Everything You Need to Know to Start Playing the Guitar!, Book & Enhanced CD (Teach Yourself Series) by Morty Manus
Bibliomysteries: Stories of Crime in the World of Books and Bookstores (Bibliomysteries) by Otto Penzler
Daughter of Moloka'i by Alan Brennert
Most Dangerous Place: A Jack Swyteck Novel by James Grippando
The Left Hand of Darkness by Ursula K. Le Guin
The Beautiful Mystery: A Chief Inspector Gamache Novel by Louise Penny
Agatha Christie: A Mysterious life by Laura Thompson
The Crow Trap: The First Vera Stanhope Mystery by Ann Cleeves
Lost Restaurants of Lincoln, Nebraska (American Palate) by Jeffrey Korbelik
The Science Fiction Hall of Fame, Volume Two B: The Greatest Science Fiction Novellas of All Time Chosen by the Members of the Science Fiction Writers of America (SF Hall of Fame) by Ben Bova
Learning the World: a Scientific Romance by Ken MacLeod
The Mermaids Singing (Dr. Tony Hill & Carol Jordan Mysteries) by Val McDermid
The Witch Elm: A Novel by Tana French
The Cuckoo's Calling (A Cormoran Strike Novel) by Robert Galbraith (2013-04-30) by
The Far Away Brothers: Two Young Migrants and the Making of an American Life by Lauren Markham
Rocks, Minerals & Gems by Scholastic
Embrace Your Weird: Face Your Fears and Unleash Creativity by Felicia Day
Broadway Songs for Guitar - Easy Guitar with Notes & Tab by Hal Leonard Corp.
Guitar For Dummies by Mark Phillips
Harmonica For Dummies by Winslow Yerxa
News of the World [Movie Tie-in]: A Novel by Paulette Jiles
Shooting Columbo: The Lives and Deaths of TV's Rumpled Detective by David Koenig
I'll Be Home for Christmas Movies: The Deck the Hallmark Podcast’s Guide to Your Holiday TV Obsession by Brandon Gray
Road of Bones (A Billy Boyle WWII Mystery) by James R. Benn
Fortune Favors the Dead: A Novel (A Pentecost and Parker Mystery) by Stephen Spotswood