HomeGroupsTalkMoreZeitgeist
This site uses cookies to deliver our services, improve performance, for analytics, and (if not signed in) for advertising. By using LibraryThing you acknowledge that you have read and understand our Terms of Service and Privacy Policy. Your use of the site and services is subject to these policies and terms.
ctkcec Profile Books Statistics Reviews Clouds 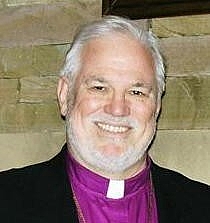 About meBishop William David Epps was born in Kingsport, Tennessee on January 15, 1951 to William E. (Bill) Epps, Jr, an electrician, and Thelma Kathleen Luster Epps, a homemaker. He was the older of two sons, Robert Wayne being born in 1959.
Epps was baptized as a teen at Kingsport's Mountain View Methodist Church by Rev. Fred L. Austin and became active in the youth group. He played football for Dobyns-Bennett High School and was on the school's karate team. He would later be named to the East All-Star Football Team at Marine Corps Base, Quantico, VA and would eventually earn black belts in Isshin-ryu Karate.
In early 1970, he enlisted in the United States Marine Corps and experienced a "deep, profound, and personal awareness of his baptismal covenant with God" at Parris Island, SC. Following his tour of duty, he received an Honorable Discharge and returned to college.
He received his Bachelor of Social Work from East Tennessee State University. Later, he would earn his Master of Arts in Biblical Literature from the Assemblies of God Theological Seminary, a Master of Theology from International Seminary, and a Doctor of Ministry from Berean Christian College Graduate School of Theology. He has also earned a Certificate of Advanced Pastoral Leadership from Trinity Episcopal School for Ministry. Epps received an honorary doctoral degree from Great Plains Baptist Divinity School and College for his decades of work combining martial arts and youth ministry.
For several years, he was a counselor/investigator in Child Protective Services for the Tennessee Department of Human Services.
In addition to service in the Marine Corps, Epps served a tour in the Tennessee Army National Guard, and served as a chaplain (captain) for the Georgia Defense Force, an auxiliary of the Georgia Army National Guard. He has been a Law Enforcement Chaplain for twenty-two years and graduated from the FBI Chaplain’s Academy in Quantico, VA and from the Fulton County (GA) Police Academy.

He is a certified law enforcement officer in Georgia and is also certified by the state as a chaplain, a defensive tactics instructor, a field training officer, and as a general law enforcement instructor. He holds the status of "master chaplain" with the International Conference of Police Chaplains and is a founding member of the Georgia Association of Law Enforcement Chaplains.

Epps has been in the ministry for over 40 years and has served churches in Tennessee, Virginia, Colorado, Georgia, and Illinois as youth pastor. assistant pastor, senior pastor, and priest. Epps was first licensed to preach in the United Methodist Church and, after a few years, entered the Assemblies of God where he served 19 years in various positions including that of Presbyter of the South Atlanta Section.

He was ordained a deacon and priest in 1995 in Oklahoma City in the Evangelical Episcopal Church by The Most Rev'd Michael Owen and, in 1996, he was received into the Charismatic Episcopal Church by The Most Rev'd Douglas S. Woodall. He became the founding pastor of Christ the King Church in September 1996. The church was renamed The Cathedral of Christ the King following Epps' being installed as the diocesan bishop in June 2009. Since its founding,the church has since purchased 11.5 acres of land, constructed a sanctuary and Parish Life Center, and has planted three mission congregations in Hogansville, GA, Fayetteville, GA, and Champaign, IL.

Epps was named to the Bishop’s Council and was Canon to the Ordinary for Bishop John Holloway for over 10 years. He also served as the Chair of the Commission on Ordained Ministry for the Mid-South Diocese. In November 2007, following a severe stroke suffered by Mid-South Diocesan Bishop John Holloway, Epps was consecrated as a Bishop in the CEC and served as an Auxiliary Bishop in the Southeast Province. On June 19, 2009, he was installed as the Bishop Ordinary for the Diocese of the Mid-South. He now serves on the Southeast Province Archbishop's Council, the Southeast Provincial Council, on the North American House of Bishops, and as a member of the national work group on church planting and growth. He was a member of the ICCEC's first Theological Conference in Orlando, FL in 2009. He has been published in numerous magazines and has been a weekly columnist for The Citizen newspapers since 1996.
David Epps currently serves at the rector of The Cathedral of Christ the King, Sharpsburg, GA, the Vicar of Christ the King CEC mission in Champaign, IL, and as Bishop Ordinary of the Diocese of the Mid-South (Tennessee and Georgia).
He has been married for 40 years to Cynthia Douglas Epps, Ph.D., who is the Associate Dean of the School of Nursing at the University of West Georgia. Cindy is also a Commissioned Minister of Medical Missions in the CEC. They have three adult sons, one of whom is a priest, and eleven grandchildren.