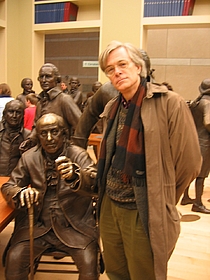 About my libraryPerhaps I first thought of "my library" in the 1970s. When I worked in a second-hand bookshop (San Francisco's McDonald's Books, now defunct, from 1976 to 1989), I was permitted to acquire books by purchasing them at our cost, and "my library" began to grow. When I began graduate school in 1980 (University of California, Berkeley, French), I used the concept of a "working library" to justify further acquisitions. In the 1990s I seemed to acquire fewer books, but after 2001 I grew increasingly interested in more current material and my library began to grow again.