HomeGroupsTalkMoreZeitgeist
This site uses cookies to deliver our services, improve performance, for analytics, and (if not signed in) for advertising. By using LibraryThing you acknowledge that you have read and understand our Terms of Service and Privacy Policy. Your use of the site and services is subject to these policies and terms.
jhevelin Profile Books Statistics Reviews Clouds 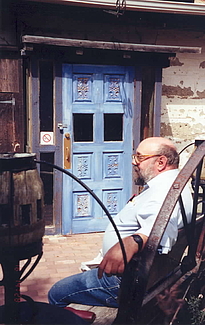 About meI was conceived on VJ Day. My mother read me Winnie-the-Pooh and Wind in the Willows. My father would read me Thurber's Thirteen Clocks. My grandfather taught physics at Antioch College, where I received a B.A. in Literature in 1968. I was a conscientious objector to the Vietnam War and worked with retarded children for two years as alternative service. I drifted into academic publishing, first for the African Studies Association at Brandeis University, and later for the University of California Press. Exposure to the UNIX operating system at Berkeley led to an interest in computer science, and I later worked for Sun Microsystems for seventeen years doing technical writing, programming, and management. I write poetry, play guitar, and am interested in just about everything, including history, science, and library science. I'm still trying to decide what I want to be if I grow up. I'm an athiest who would class myself as an ethical humanist, socialist at heart, very left-wing and progressive. Kurt Vonnegut's address to the 1970 graduating class of Vassar, printed in Vogue with the title "Up Is Better Than Down," pretty much sums up my philosophy.

About my libraryMy catalog includes only books that I own. As others have stated, I view this project as a form of autobiography. I have a homegrown database written in Perl of my film collection, and I'm using iTunes, vi, and SQLite on my iMac to help me catalogue my music collection. I'm not comfortable including books that I've read but don't own. Until my late twenties, I was too poor to buy many books and relied heavily on libraries and gifts, so authors that I read in those years, such as O. Henry, de Maupassant, Ellery Queen (both the authored works and the edited collections of short stories), Leslie Charteris (The Saint), and Rex Stout (Nero Wolf) are underrepresented. Also, I haven't read everything I own by any means.

My collection comprises literature and the humanities, science and the history of science, computer science (strongly focussed on UNIX), political writings, and much more. I tend not to keep books I don't like, which skews the ratings toward the high end. I was a friend of Stephen J. Gould for many years, and I have a lot of his books. I was also on the advisory board of the 15th revision of the University of Chicago Manual of Style, and I'm participating in the 16th revision underway.

I've recently begun to reduce the size of my library. The tag "donated" indicates books that I've sold or donated to various friends-of-the-library organizations.