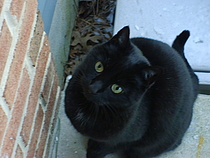 About meI love to read!!!! My favorite genres are fantasy and sci fi, but I like books about basically anything. I could sit and read for hours on end. I managed to finish the entire Harry Potter 7 in less than a day!

About my libraryI love the library! So I tend to check out books instead of buying them. There are so many books I've read that I wish I had bought. A lot of my books are from when I was little...I really need to update what I have.

My copy of Kindred Spirit is the "advanced uncorrected proofs" or something like that so it doesn't have a real cover and it still has all the mistakes from before it was published. Cool, huh? :)