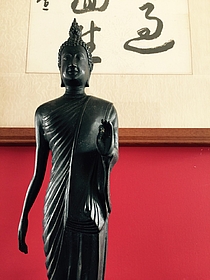 About me"No matter how much a man may study, reflect and meditate on all the books in the world, he is nothing more than a minor scribe unless he has read the great book."
Diderot

I am a reader in search of the great book, a minor scribe.

True criticism is a search for beauty and truth and an announcement of them.
Robert Lynd

"The First Night
Night falls, soothing to lascivious old men
My cat, Murr, hunched like some heraldic sphinx,
Uneasily surveys, from his fantastic eyeball
The gradual ascent of the chlorotic moon.

The hour of children’s prayers, when whoring Paris
Hurls on to the pavement of every boulevard
Her cold-breasted girls, who wander with searching
Animal eyes under the pale street lights.

I imagine myself within the cemetery,
Entering the tombs, going in place
Of those who will spend their first night there."
Jules Laforge

"Books became the first and only reality, whereas reality itself was regarded as either nonsense or nuisance. Compared to others, we were ostensibly flunking or faking our lives. But, come to think of it, existence which ignores the standards professed in literature is inferior and unworthy of effort."
Joseph Brodsky 'Less than One'

"Forgive us literature, forgive us our transgressions, as we forgive yours."
Dostoevsky 'Petersburg Chronicles'

"Culture is the best that has been thought and known in the world."
Matthew Arnold

"What's poetry, if it's worth its salt
but a phrase men can pass from hand to mouth?
From hand to mouth, across the centuries,
the bread that lasts when systems have decayed..."
Derek Walcott 'The Forests of Europe'

I am a cat with a catty sense of play. However, my intentions are always good so assume the best. A knowledge of Hoffmann helps.

To acknowledge a fake as fake contributes only to the triumph of accountants.
Werner Herzog

Currently readingThe Collected Stories of Isaac Babel by Isaac Babel
Handful of Leaves, Volume Three: An Anthology From the Samyutta Nikaya by Thanissaro Bhikkhu
History of Indian Buddhism: From Sakyamuni to Early Mahayana by Hirakawa Akira