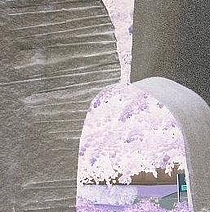 About meSome years ago I got a first degree in French, although most of my working career – not that long really after I'd spent so much time bumming around before deciding what to do with my life as a potential work slave – was spent in teaching English Language and Literature. I've since gained an MA with Distinction in Literature on the forgotten novelist James Prior's book Forest Folk (1901), which is a kind of ahistorical, working-class take on the New Woman. My PhD in Literature followed hot on its heels, and 'The Work of Lionel Britton' is largely a thesis about the huge modernist, working-class novel Hunger and Love (1931), which boasted (equally hugely) a five-page, largely eulogistic, Introduction by Bertrand Russell. I'm now writing a biography of Lionel Britton, but in reality spending far more time reading books that are totally unrelated to any such research.

About my libraryAlthough I've included many fictional works here, I probably spend far more time – as when I was a student – reading biographical, historical, cultural, whatever sources to give a contextual approach to what I'm reading. I'm very interested in experimental fiction, and also the literature of outsiders, including women, non-whites, homosexuals, the working class, the shy, and any other political minorities that don't normally get a decent voice in life.