So, browsing on Pinterest this morning, I found someone who has collected examples of great endpapers:
http://pinterest.com/alskarfred/endpapers/

opening yet another door for appreciation of the book for me.

Those are beautiful. Thanks! (Choosing endpapers was always my favorite part of doing projects in my bookbinding class, because I had so much freedom in the kind of papers I chose.)

Lovely! I especially like the endpapers on that page for The Velveteen Rabbit, with the "suggestion" of bunnies, if that makes sense.

It is interesting to see that someone was collecting books specifically for the variety of endpaper designs. It makes sense.

The Grosset & Dunlap juvenile series books had blank endpapers until mid-1932. At that point illustrated endpapers were added with a different design for each series. For some series, like Nancy Drew, there can be a few different endpaper designs over time. For some volumes during a short period of time, endpapers from the Dana Girls were used on Nancy Drew volumes. These are common enough that people actually try to collect them.

The Rand McNally Windermere series had the same set of illustrated endpapers for all volumes in the 1930s black cloth format. The two 1920s blue cloth formats each have their own endpaper design. However, earliest format had distinctive endpapers for each volume. This is the buckram cloth format of the 1910s which are seldom seen by collectors and booksellers.

The Dent Dutton Children's Illustrated Classics series devised a tesselating design for both the endpapers and the cloth of the book. Each design shows a good deal of creativity to tie it into the theme and subject of the book.

The Winston Science Fiction series generally had a set of dramatic illustrated endpapers with a scene by Alex Schomburg which remains a favorite of fans of 1950s science fiction themes.

The Rocket Riders series published by A.L. Burt used blue-tint illustrated endpapers with four scenes to represent the four volumes in the series.

Meanwhile, the Adventures in the Unknown series published by Grosset & Dunlap had illustrated endpapers that were specific to the story. The front and rear endpapers were different for each volume.

The Brixton Brothers series by Mac Barnett are a modern parody of the Hardy Boys. The new series has endpapers with many small scenes, also parodies, which evoke the 1950s-1970s endpapers used for the series.

I've seen anomalies in endpapers where they were applied upside down compared with the text pages and cover. In one case it seems that they were trimmed in the wrong place and they are swapped left and right. For the front the fixed endpaper image is on the right and the free endpaper image is on the left. It was supposed to be a continuous image so this is a more unusual error.

In the older books, it was common for printer/publishers to print more sheet sets than they needed. They would gather them together into page blocks (groups of signatures that form the content of the book) often with the endpapers attached and placed them in temporary boards. When a binding order came in, books were placed in the illustrated boards of the day. In the pre-WWII Grosset & Dunlap series with ad pages in the back of the story, the endpapers were apparently not attached to allow them to insert the latest ads at the time of binding. Hence, by looking at the post-text ads, and noting the years for the last title listed in each series, you can make an estimate of the earliest year for that copy based on the latest year for a title listed. Series book collectors also consult the listings on the jacket itself.

Some modern books have endpapers which feature maps or blueprints. However, it seems less common to have great endpapers in books today unless they are part of a fine press edition.

I have a box of rescued end-papers. Someone should do a database online somewhere. Dissertation project for someone.

Shall we scan and post some from our own collections?

These are from a rebound copy of Edith Diehl's Bookbinding, its Background and Technique. The marbling is by Norma Rubovits. One of these days I will use these endpapers as paper boards and endpapers in the repair my set of Allibone's Dictionary of Authors: Bear with me on this one! It IS on topic!

Okay, I've been madly taking pics of cool endsheets, and you can see them in this Flickr set. I expect I'll be adding to it as time goes on.

One isn't technically an endsheet (the Hokusai), but I had to share. Also, two of the photos of Botticelli endsheets from his illustrations for Dante's Inferno are labeled "moderate" because I refuse to label Botticelli "restricted", but you are warned.

Wow! Thanks for sharing those.

Oh, thanks! There's a flickr group for everything, I think. Off to join and post some pics.

This is from a set of books which were my first reading materials: The set is Book Trails.

This one is from Picture Book of Mother Goose by Berta Hader:

I see I need to add it to my library and add the cover. She was a Caldecott winner. The illustrations throughout are great. I love the nosey cow.

I found the Random House version of Rubáiyát of Omar Khayyám, illustrated by Mahmoud Sayah this weekend at a flea market. It has these type of silhouette drawings on each page behing the colored art and the boxed text. There are seven different backgrounds, featuring different animal species. 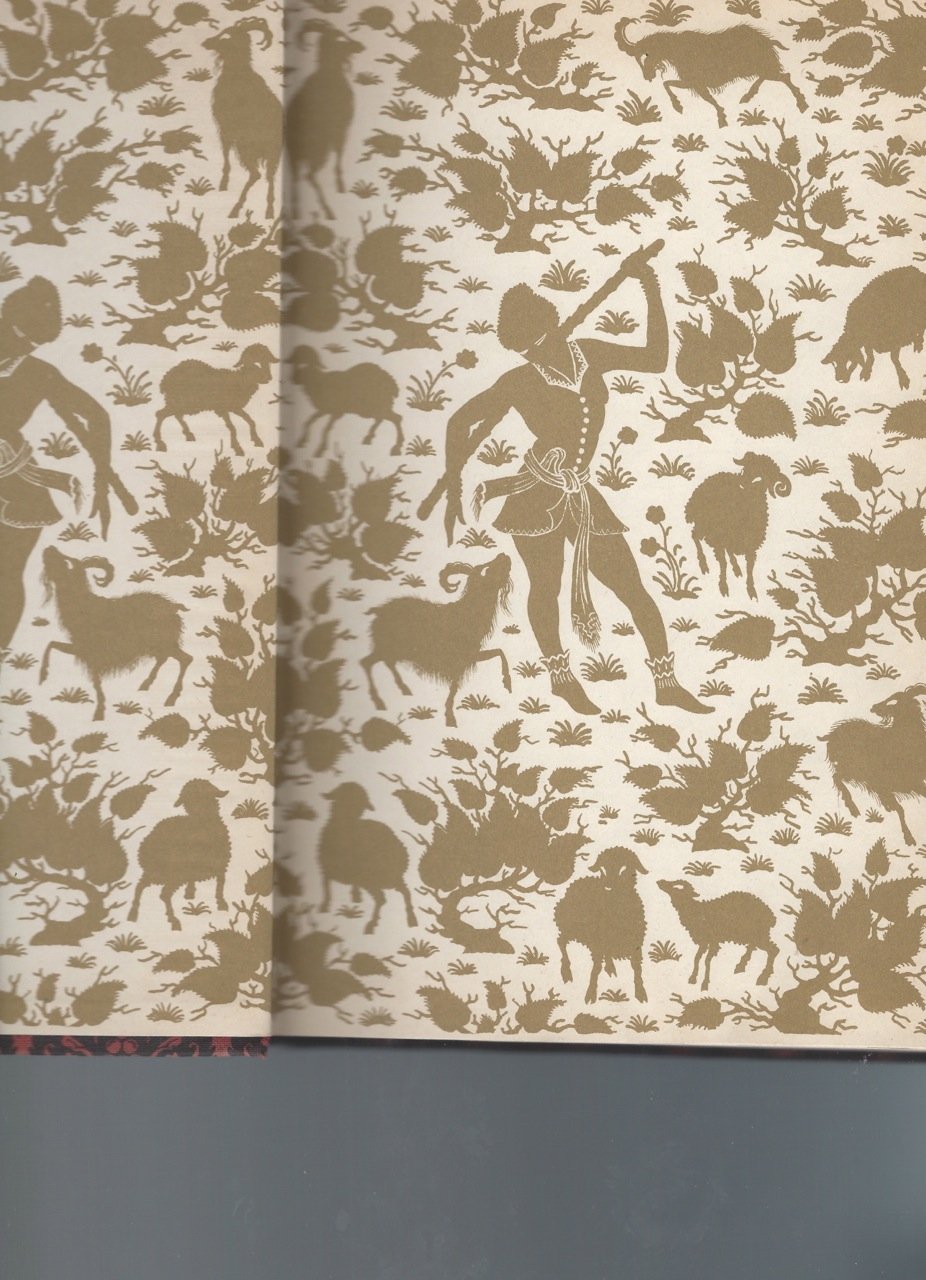 Does great illustration artwork in the rest of the book always accompany wonderful endpapers?
These particular examples were published before 1950 and the pictures have great saturated colors.

I found a few more.

I darkened it to make details more visible.

all of whose subjects seem to have a tummy ache. 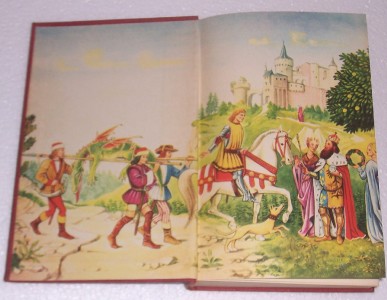 which is pretty dang boring, but included because the Grimm and Anderson are a boxed set.

I've added some more to my Flickr set, but I'm particularly fond of this one from The Eccentric Teapot. These ladies look as though there is something other than tea in those cups!

Looks as if that statue is eager to come join them as well.

This one is rather fun. It's from Wynton Marsalis' Jazz A-B-Z. Turn the page and you get I bought Cupid's Understudy partly because the binding was so pretty and in pristine condition, and I had enjoyed another of the author's books.
All pages have decorative details and here's the endpapers:

Hmmm. >14 2wonderY: & 15 My membership must have lapsed at that photo storage site. Dang!

Just acquired this one, illustrated by Pauline Baynes 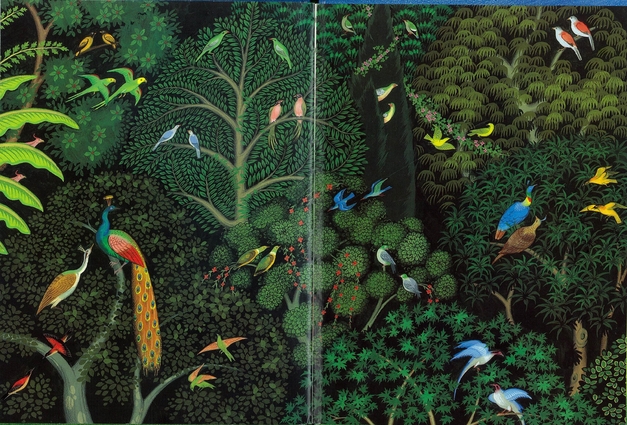 in The Naming. I LOOOOOVE it.

Just got a book today, Spike of Swift River, and look at the wonderful endpapers!

I found this one today - 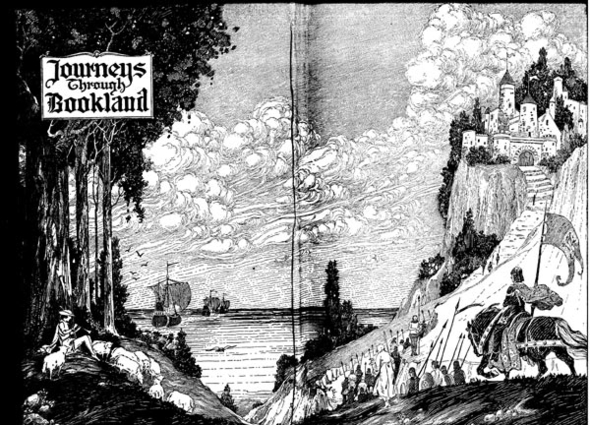 Argh! I thought I'd gotten all the glitches from my previous picture hosting site.

I've got the endpapers saved to my desk computer, will try to repost them, tomorrow.

I just noticed post #21...is that the same illustrator of the classic edition of The Lion, the Witch, and the Wardrobe?

Yes, Pauline Baynes is one of the best-known illustrators for the Narnia series.

I saw the Penguin Threads The Wind in the Willows cover, which is wonderful, and ordered another of their titles from the library.

Little Women's cover was executed by Rachell Sumpter, in a sampler format. Here's the entire cover:

The paper is embossed so that the threads are raised.

It's wider than you'd think because it has folding flaps too.

I wasn't particularly pleased with the design, but when I opened the flap I was startled. It looked at first glance as if a 3-year-old had taken crayons to the inside.

Ha ha ha! It's the reverse side of the embroidery.

Nice one! I love when they have that kind of thoroughness.

Not a clear picture, but one I would find fascinating to study

Well, it's not my group. >12 overthemoon: steered me to it and I added some of my photos.

>27 2wonderY: thanks for introducing me to these Penguin Threads... they look wonderful! I'm now fighting with myself because I already have copies of all those books (though some of them extremely ancient - from my childhood).

Have joined the endpaper group over on flickr and kicked in my few photos.

I don't recall illustrations, so if they were there, they were insignificant. None of the blogs or webpages I looked at this morning mention illustrations. Penguin lists 7 titles.

GoodReads has a list that is edition specific !!! But it includes the other Classic Deluxe covers too.

>36 2wonderY: thanks; I saw that link, which was why I was wondering what they are like inside. Maybe Amazon has a "look inside" thing - I'll go and see.

OK, so The Wizard of Oz does have black and white illustrations, but the others seem to be just text, with references to notes that are printed at the back.

Since there is no way to isolate the Penguin Threads images into it's own series, I thought I'd post some of them here. 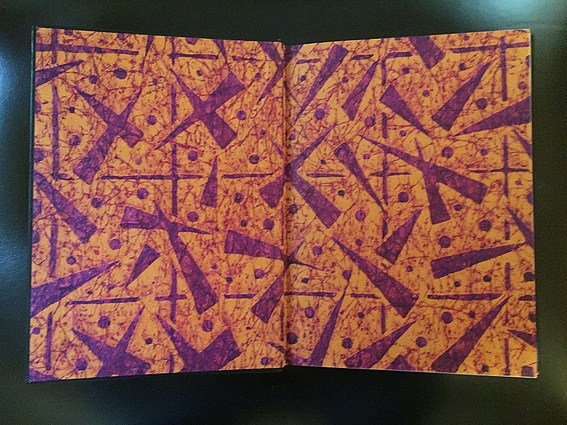 Was this one of the groups that had been archived? I’m so glad Tim listened and reconsidered. And thanks for reviving the thread!