I added a new collection, but I wanted to put it near the end of the list. I go to "your books", and under the collections drop down, choose "edit collections". The pop up says "drag and drop to re-order", but it doesn't work for me. I can drag, but where ever I try to put it, nothing happens, and it stays at the top. I am using firefox 66.0.3 on a Mac running high sierra.

Apologies if this has been reported before.

>1 al.vick: Can you please tell us which collection it is that you're trying to move? I'll want to log in as you and test.

Seems like a design issue where you need to be able to scroll up/down in a list of many Collections to drag-and-drop.

I tested this out, and I'm unable to do properly drag-and-drop on an account with more Collections than will fit in the menu without scrolling (via Chrome). I can drag-and-drop it within my field of view, but anything outside that it doesn't scroll with me to see where I'm dropping it. Assuming this is part of the issue.

Assigning to conceptDawg, with the caveat that it's also getting deferred because this may get fixed in the LT2 redesign.

I was going to post this as a new bug, but noticed this report, so I'll add my two cents...

I added a new collection just now and wanted to move it to the bottom of the list, but when I clicked-and-dragged, it would move but not stay where I put it. I noticed that I can successfully rearrange collections only when I'm scrolled to the top of my catalog page. If I'm mid-page, nothing stays moved in the collections list. In the first screenshot, look at the catalog scroll bar on the far right. It's at the top, and I can move the collections. In the second screenshot, the catalog scroll bar is a bit down from the top and I can't rearrange the collections. I'm using Windows 10/Chrome 78.0.3904.87. It does the same thing in Internet Explorer, not that anyone should be using IE these days, but I'm trying to work in two accounts at the same time...

(If I knew how to make gifs, I'd totally have animated example screenshots right now.) 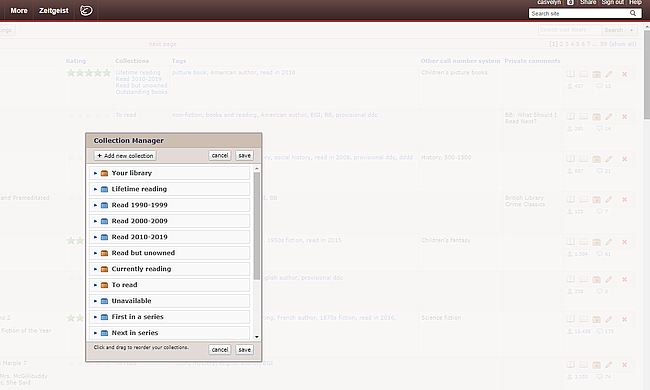 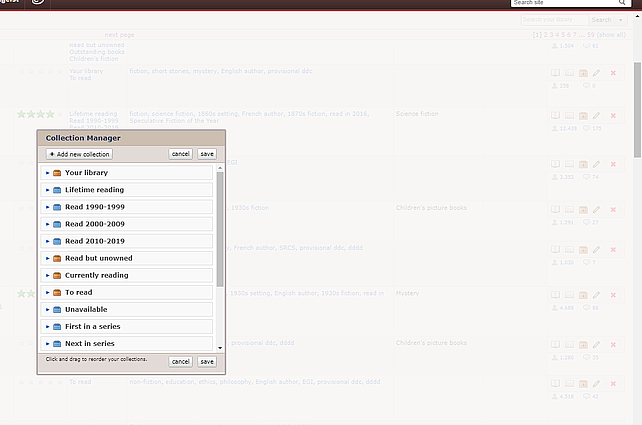 It's always worth trying the collections editing from a different place. Sometimes it works better. (In the catalogue, from the book detail box, in edit book...)

I had that problem but I found I could do it from the Add Books page.

Join or watch Bug Collectors to get "Bug Tracking" under "The World" in Talk all the time.