Each month, we will visit a different state in the United States of America for the Monthly Reading Challenge in the Mystery & Suspense Extra! Group. This month, we travel to the state of New Hampshire. 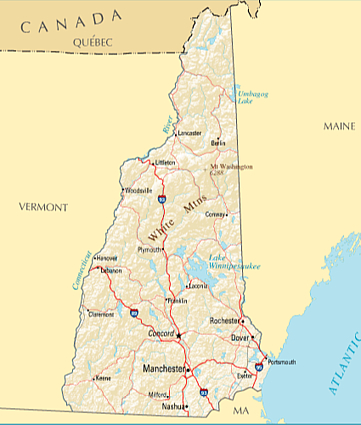 New Hampshire is a state in the Northeastern region of the United States of America; its capital is Concord and the largest city is Manchester. New Hampshire is the 5th smallest state by area (only 9,348 square miles!) and the 10th least populous US state with approximately 1.3 million people based on the 2010 census.

In January 1776, New Hampshire became the first of the British North American colonies to establish a government independent of Great Britain’s authority and it was the first to establish its own state constitution. Six months later, it became one of the original 13 colonies that signed the US Declaration of Independence and in June 1788, it was the ninth state to ratify the US Constitution bringing that document into effect.

Historically, New Hampshire was a major center for textile manufacturing, shoemaking and papermaking, with Amoskeag Manufacturing Company in Manchester at one time being the largest cotton textile plant in the world. In the late 19th and early 20th century, many French-Canadians migrated to the state to work in the mills; New Hampshire still ranks second among states by percentage of people claiming French-American ancestry at 24.5% of the population.

Following the exit of major manufacturing industries in the 1930s and 1940s, defense contractors moved into many of the former mills. In the 1980s, the population in the southern portion of the state surged as major highways were built connecting New Hampshire to the Greater Boston area, resulting in the establishment of several bedroom communities in the state.

New Hampshire is bordered by Massachusetts to the south, Vermont to the west, Maine and the Atlantic Ocean to the east and the Canadian province of Quebec to the north. New Hampshire’s nicknames include: “Granite State”, “Mother of Rivers”, “Switzerland of America”, and “White Mountain State”.

With some of the largest ski mountains on the East Coast, New Hampshire’s major recreational attractions include skiing, snowmobiling, and other winter sports, hiking and mountaineering, observing the fall foliage and motor sports. 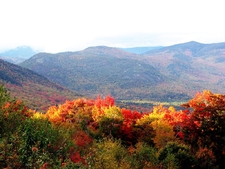 New Hampshire is the state with the highest percentage of timberland in the country. The northern third of the state is locally referred to as the “north country.” It contains less than 5% of the population, suffers relatively high poverty and is steadily losing population as logging and paper industries decline. However, the tourist industry, in particular visitors who go to northern New Hampshire to ski, snowboard, hike and mountain bike, has helped offset economic losses from mill closures.

New Hampshire became the home to the first ever known case of an alien kidnapping in 1961 when Betty and Barney Hill, natives of Portsmouth, announced that they were abducted by extraterrestrials and taken into a UFO. There is a state historical marker at the “abduction site.” 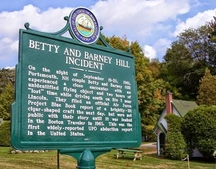 New Hampshire plays and important role in national elections, as it is the first state to hold national primaries, and its primary results are thought to influence those in the rest of the nation, giving rise to the saying “As New Hampshire goes, so goes the nation.” Until the 1992 elections, no candidate had ever won the Presidency without first winning New Hampshire’s primary.
The state’s motto is “Live Free or Die.”

New Hampshire is one of only nine states that does not have a state income tax.

In 1833, the first free public library in the United States was established in New Hampshire.

On December 30, 1828, about 400 mill girls walked out of the Dover Cotton Factory enacting the first women’s strike in the US. The Dover mill girls were forced to give in when the mill owners immediately began advertising for replacement workers.

The Bavarian style hamlet of Merrimack, New Hampshire is home to the famous 8-horse hitch and the Clydesdales maintained by Anheuser-Busch Brewery.

Franklin Pierce is the only New Hampshirite to be the United States President. He was the 14th President and held office March 1853 to March 1857. Though his presidency is generally considered flat, New Hampshirites can take comfort in the fact that he was ranked America’s 5th sexiest President by Nerve.com.

New Hampshire is likely to be #1 in the US if judged by the country’s comedy talent. Late Night host Seth Meyers, stand-up comedian Sarah Silverman and Adam Sandler are all natives of New Hampshire.

Alan Shepard Jr. and Christa McAuliffe considered New Hampshire home. Shepard was the first astronaut who successfully completed a 15-minute flight, 116 miles into the atmosphere on May 5, 1961. McAuliffe, who was the first civilian in space, perished in the Challenger accident on January 28, 1986.

Daniel Webster was a politician and statesman born in New Hampshire in 1782. He was known as a mighty orator, a reputation preserved in the Stephen Vincent Benet story The Devil and Daniel Webster, in which he beats the original lawyer, Lucifer, in a contract over a man’s soul.

Other notable New Hampshirites include Robert Frost (poet), Horace Greeley (journalist, author, politician), Samuel Shelburne (1st Attorney General of the US) and Sarah Josepha Hale – the author and journalist who wrote “Mary Had a Little Lamb” in 1830.

In honor of New Hampshire, read a Mystery/Suspense book (any sub-genre will do!) that satisfies one or more of the following:

• A Mystery/Suspense book with “New,” “Space,” “Free,” or “White” in the title or an outdoor scene on the cover;

• A Mystery/Suspense book where the main character(s) travels a long distance, is set in the future or takes place primarily in the autumn or

• A Mystery/Suspense book where the main character(s) travels a long distance, is set in the future or takes place primarily in the autumn or
Any Witch Way You Can by Amanda M. Lee; takes place in the fall; 9/17/19; 3.5 stars

• A Mystery/Suspense book where the author's initials (BOTH the first AND last) can be found in NEW HAMPSHIRE
Murder at Blackburn Hall by Sara Rosett; Sara Rosett; 9/7/19; 4 stars

Carol's going to New Hampshire to get a new pet...but it won't fit in the house!! Oh Well...

📌2. A Mystery/Suspense book where the main character(s) travels a long distance, is set in the future or takes place primarily in the autumn or
Paradox Bound by Peter Clines - 4★

3. A Mystery/Suspense book where the author's initials (BOTH the first AND last) can be found in NEW HAMPSHIRE
The Magpies by Mark Edwards- ★

Lynda and Oliver Search for UFOs in New Hampshire

• A Mystery/Suspense book with “New,” “Space,” “Free,” or “White” in the title or an outdoor scene on the cover;

📌 A Mystery/Suspense book where the main character(s) travels a long distance, is set in the future or takes place primarily in the autumn
Vendetta in Death - J. D. Robb - 4.5 Stars - 9/19/19

I'm going to read Past Tense by Lee Child. There's an outdoor scene on the cover and it's set in New Hampshire.

• A Mystery/Suspense book where the main character(s) travels a long distance, is set in the future or takes place primarily in the autumn or

When Billy, a troubled young man, comes to private eye Cormoran Strike’s office to ask for his help investigating a crime he thinks he witnessed as a child, Strike is left deeply unsettled. While Billy is obviously mentally distressed, and cannot remember many concrete details, there is something sincere about him and his story. But before Strike can question him further, Billy bolts from his office in a panic. Trying to get to the bottom of Billy’s story, Strike and Robin Ellacott—once his assistant, now a partner in the agency—set off on a twisting trail that leads them through the backstreets of London, into a secretive inner sanctum within Parliament, and to a beautiful but sinister manor house deep in the countryside. And during this labyrinthine investigation, Strike’s own life is far from straightforward: his newfound fame as a private eye means he can no longer operate behind the scenes as he once did. Plus, his relationship with his former assistant is more fraught than it ever has been—Robin is now invaluable to Strike in the business, but their personal relationship is much, much trickier than that.

The last part of the book was much better than the first part. The main problem with the entire book was the constant whining about the character of Matthew. I came to hate Matthew with a passion. Then there was the parts entirely devoted to the love affair triangle. I usually like Cormoran Strike novels but I just can't find much good to say about this one. In whole the overall plot was stranger than strange. The story just seemed to dig itself into a rut.

16 September - Among the Mad - Jacqueline Winspear 4★s (Outdoor scene on the cover)
18 September - Gently with the Painters - Alan Hunter 4★s (Authors initials in NEWHAMPSHIRE)
29 September 2019 - Past Caring - Robert Goddard 4.5★s (Main character travels a long distance: England to Madeira and back - over 3000 miles.)

>8 Sergeirocks: I like that series! I'm currently reading Messenger of Truth which is book 4 so i have one more before I get to that one.

>9 bhabeck: A series which I'm actually reading in order...! 😉 This one was a bit of an eye-opener as to how the returning soldiers of WWI were treated. Historically speaking, a very educational series.
The stories so far have all been 4-5★s for me.

Outdoor scene on the cover and set in New Hampshire

Past Tense by Lee Child
4 ★

Jack Reacher hits the pavement and sticks out his thumb. On a country road deep in the New England woods, he sees a sign to a place he has never been: the town where his father was born. He takes the detour. At the same moment, in the same isolated area, a car breaks down. Two young Canadians had been on their way to New York City. Now they’re stranded at a lonely motel in the middle of nowhere. The owners seem almost too friendly and a bit strange. As Reacher explores his father’s life, and as the Canadians face lethal dangers, strands of different stories begin to merge.

This story had a slow buildup of tension and creepiness that kept me reading. When Reacher and the Canadians finally come together, chaos and danger are rampant. Reacher acts in his typically vigilante way, which is a bit far-fetched but entertaining. And the Canadians weren’t too bad themselves.

>10 Sergeirocks: have you read the Maggie Hope series by Susan Elia MacNeal? I just finished the first book in the series - Mr. Churchill's Secretary and thought it was very good.

>13 Sergeirocks: based on the storyline in Book 1, you should definitely read that one first if you read the series.