Each month, we will visit a different state in the United States of America for the Monthly Reading Challenge in the Mystery & Suspense Extra! Group. This month, we head west to Louisiana's neighbor – TEXAS, a state that has been in the news quite a bit recently.

Texas is a state in the South Central region of the United States. At 268,596 square miles (695,662 sq km), and with more than 29.1 million residents in 2020, it is the second-largest U.S. state by both area (after Alaska) and population (after California). Houston is the most populous city in Texas and the fourth-largest in the U.S., while San Antonio is the second most populous in the state and seventh-largest in the U.S. Dallas–Fort Worth and Greater Houston are, respectively, the fourth- and fifth-largest metropolitan statistical areas in the country. Texas is nicknamed the "Lone Star State" for its former status as an independent republic, and as a reminder of the state's struggle for independence from Mexico. The "Lone Star" can be found on the Texas state flag and on the Texas state seal. The origin of Texas's name is from the Caddo word táyshaʼ meaning 'friends'.

The term "six flags over Texas" refers to several nations that have ruled over the territory. Spain was the first European country to claim and control the area of Texas. France held a short-lived colony. Mexico controlled the territory until 1836 when Texas won its independence, becoming the Republic of Texas. In 1845, Texas joined the union as the 28th state. The state's annexation set off a chain of events that led to the Mexican–American War in 1846. A slave state before the American Civil War, Texas declared its secession from the U.S. in early 1861, and officially joined the Confederate States of America on March 2 of the same year. After the Civil War and the restoration of its representation in the federal government, Texas entered a long period of economic stagnation.

Historically, four major industries shaped the Texas economy prior to World War II: cattle and bison, cotton, timber, and oil. Before and after the U.S. Civil War, the cattle industry—which Texas came to dominate—was a major economic driver for the state, and created the traditional image of the Texas cowboy. In the later 19th century, cotton and lumber grew to be major industries as the cattle industry became less lucrative. It was ultimately, though, the discovery of major petroleum deposits (Spindletop in particular) that initiated an economic boom which became the driving force behind the economy for much of the 20th century. Texas developed a diversified economy and high-tech industry during the mid-20th century. As of 2015, it is second in the United States of most Fortune 500 company headquarters with 54. With a growing base of industry, the state leads in many industries, including tourism, agriculture, petrochemicals, energy, computers and electronics, aerospace, and biomedical sciences. Texas has led the U.S. in state export revenue since 2002 and has the second-highest gross state product. If Texas were a sovereign state, it would have the 10th-largest economy in the world. 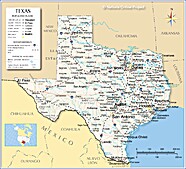 Due to its size and geologic features such as the Balcones Fault, Texas contains diverse landscapes common to both the U.S. Southern and the Southwestern regions. Although Texas is popularly associated with the U.S. southwestern deserts, less than ten percent of Texas's land area is desert. Most of the population centers are in areas of former prairies, grasslands, forests, and the coastline. Traveling from east to west, one can observe terrain that ranges from coastal swamps and piney woods, to rolling plains and rugged hills, and finally the desert and mountains of the Big Bend.

Texas is the second-largest U.S. state, after Alaska, with an area of 268,820 square miles (696,200 km2). Though 10% larger than France, almost twice as large as Germany or Japan, and more than twice the size of the United Kingdom, it ranks only 27th worldwide amongst country subdivisions by size. If it were an independent country, Texas would be the 39th-largest. 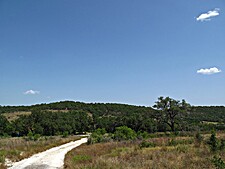 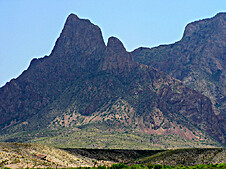 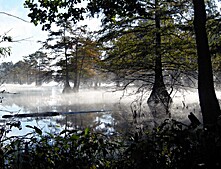 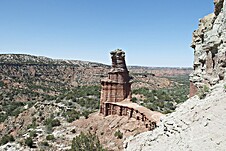 Fun Facts
"Everything is Bigger in Texas:

Dr Pepper was invented in Texas in 1885. Created by Charles Alderton in Waco, Dr Pepper was first nationally marketed in 1904 and is now sold all over the world. The recipe is a secret and is kept in two halves in safety deposit boxes located in two different Dallas banks. 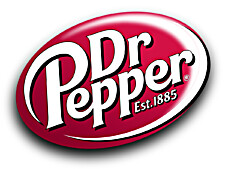 The deadliest natural disaster in United States history occurred in Texas. The Great Galveston Hurricane of 1900 took between 6,000 and 12,000 lives with a storm surge of 8–15 feet (2.4–4.5 meters). The next deadliest hurricane in U.S. history was Hurricane Katrina, which claimed 1,200 lives.

A time capsule in Texas contains a passbook to a bank account expected to be worth $1 quadrillion by the time it opens in 2968. The Helium Centennial Time Columns Monument was built in 1968 in honor of the 100th anniversary of the discovery of helium. One of the time capsules sealed on the monument is set to open 1,000 years from that date and has a passbook to a bank account with a $10 bill. 0s. 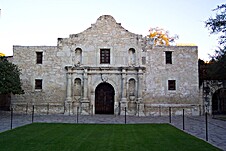 The last battle of the Civil War was fought on May 12-13, 1865, at Palmito Ranch, Texas. It was a Confederate victory.

On November 22, 1963, President John F. Kennedy was assassinated during a motorcade through downtown Dallas. Vice-President Lyndon B. Johnson of Texas was sworn in as president aboard the presidential airplane at Dallas’ Love Field airport that same day.

Texas football is no joke. In fact, in 2014 the small town of Decatur voted to reschedule Halloween to October 30 because the October 31 date would have conflicted with the local high school's Friday night football game. Makes total sense—but that's not all. Nearly 14 percent of the state's high school stadiums boast video scoreboards and the high-school football game with the all-time highest attendance rate was a 2013 playoff game that brought together 54,357 fans.

Vietnamese is the third most spoken language in Texas. English and Spanish, of course, are the two most spoken by a landslide. … and there’s a dialect of German in the Lone Star State that is specific to Texas. Texas has an enormous amount of German heritage dating to the 19th century, including plenty of German town names that dot the map (Fredericksburg and Luckenbach, for example). One of the results of this heritage is Texas German, a specific dialect of German spoken by the descendants of German immigrants who settled in Texas.

Texas is the only state to have the flags of 6 different nations fly over it. They are: Spain, France, Mexico, Republic of Texas, Confederate States, and the United States.

Texas can boast that it was the home state of 2 US Presidents – Lyndon B Johnson and George W Bush. Lyndon Baines Johnson; August 27, 1908 – January 22, 1973), often referred to by his initials LBJ, was the 36th president of the United States, serving from 1963 to 1969. He had previously served as the 37th vice president from 1961 to 1963 under President John F. Kennedy. A Democrat from Texas, Johnson also served as a U.S. representative, U.S. senator and the Senate's majority leader. He holds the distinction of being one of the few presidents who served in all elected offices at the federal level.

In honor of TEXAS, read a Mystery/Suspense book (any sub-genre will do!) that satisfies one or more of the following:

• A Mystery/Suspense book with "Star," "Ranch," "Cattle," "Sport/Football," or "Prairie" in the title OR has a picture of a cowboy, cattle (with horns), or an oil derrick on the cover;

• A Mystery/Suspense book that takes place in the American Southwest OR takes place on a ranch/involves a ranch/farmhand OR has a character involved in the energy field OR involves a natural disaster; and

• A Mystery/Suspense book where the author's FIRST and LAST initial (no middle initials or names) can be found in TEXAS.

In honor of TEXAS, read a Mystery/Suspense book (any sub-genre will do!) that satisfies one or more of the following:

• A Mystery/Suspense book where the author's FIRST and LAST initial (no middle initials or names) can be found in TEXAS.
Tears of the Giraffe by Alexander McCall Smith; 10/9/21; 3 stars 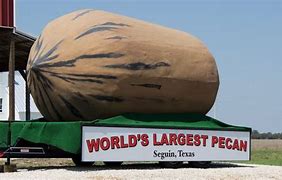 📌1. A Mystery/Suspense book with "Star," "Ranch," "Cattle," "Sport/Football," or "Prairie" in the title OR has a picture of a cowboy, cattle (with horns), or an oil derrick on the cover
Goodnight Moo - Mollie Cox Bryan - 3★

📌2. A Mystery/Suspense book that takes place in the American Southwest OR takes place on a ranch/involves a ranch/farmhand OR has a character involved in the energy field OR involves a natural disaster.
The Vanishing - Bentley Little - 4★ ( a gas line explodes and a cave collapses)

📌3. A Mystery/Suspense book where the author's FIRST and LAST initial (no middle initials or names) can be found in TEXAS.
The Pint of No Return - Ellie Alexander - 4★ (E & A)

I'm going to read The Devil Went Down to Austin by Rick Riordan.
It takes place in Texas and involves a ranch. 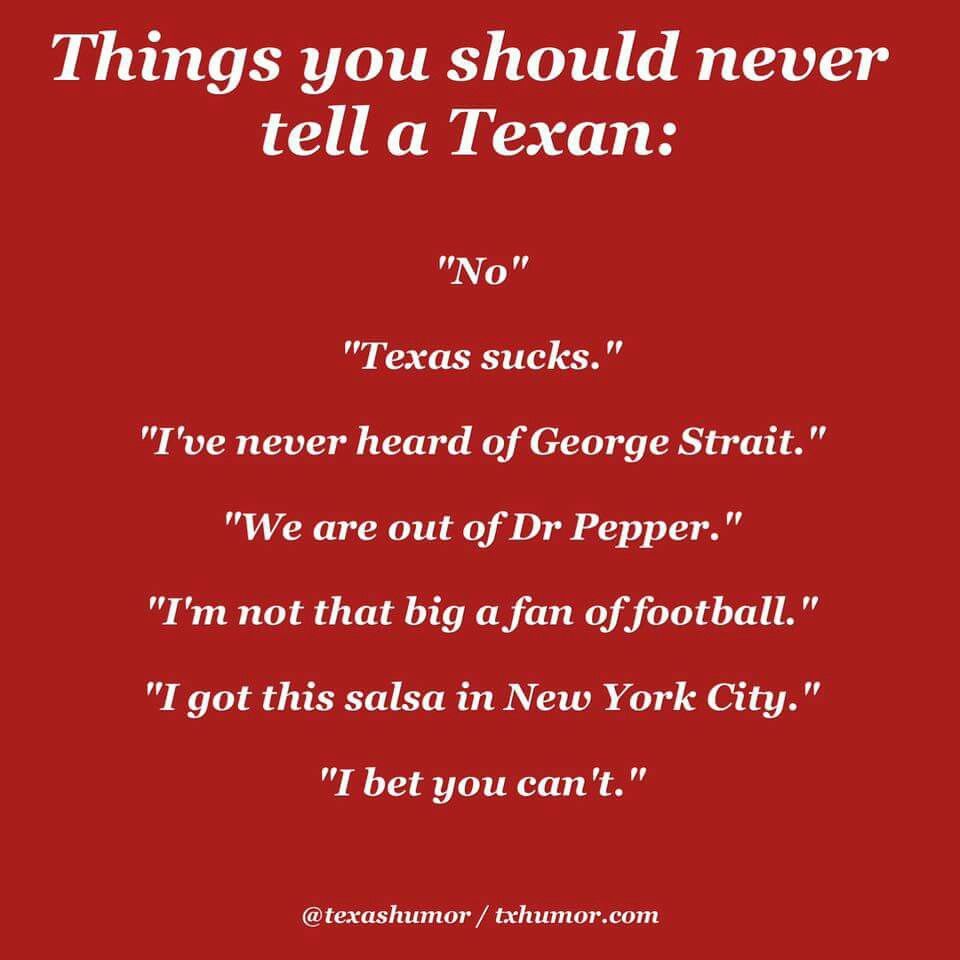 🐎 A Mystery/Suspense book that takes place in the American Southwest OR takes place on a ranch/involves a ranch/farmhand OR has a character involved in the energy field OR involves a natural disaster.
Valentine - Elizabeth Wetmore - 4 Stars - 10/20/21 - set in Texas

• A Mystery/Suspense book where the author's FIRST and LAST initial (no middle initials or names) can be found in TEXAS.

The Devil Went Down to Austin by Rick Riordan - 4 ★
It takes place in Texas and involves a ranch.

All done. I enjoyed my trip to Texas. Thanks, Brenda

Usually the author initials are a piece of cake but I failed miserably this month. At least I got two out of three.

>11 Olivermagnus: LOL. This month gave me issues as well. I had a book all picked out for category 1 but when I went to download it to kindle, I figured out that the book had been republished with a new name (which, of course, did not qualify!)