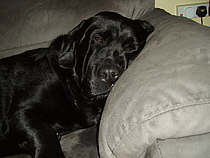 About meI'm female, a year or two older than Madonna, and retired from full-time work on health grounds. Up until my 30s I simply read everything I could get my hands on but eventually found I had exhausted the shelves of both my local libraries and wasted a lot of time reading a lot of dross. My Damascene moment (or six years of them) came when I took my BA(Hons) in English Language and Literature with the Open University and, not only was introduced to many authors who were new to me, but also learned more about my own tastes and developed an ability to find the kind of books I love without having to trudge through a load of rubbish to get there. I have a husband and two grown up children and am full-time slave to the world's most adorable black labrador and my daughter's two cats. I'm also learning to play the Celtic harp which takes up very nearly as much time these days as reading does.

I'm very grateful to the people who have chosen and continue to choose to tag my library as 'interesting' but don't always have time to reply to everyone who does so. I hope nobody will be offended if I don't get round to writing back - believe me, I would have meant to at the time!

What Kind of Reader Are You? Your Result: Obsessive-Compulsive Bookworm You're probably in the final stages of a Ph.D. or otherwise finding a way to make your living out of reading. You are one of the literati. Other people's grammatical mistakes make you insane.Dedicated Reader Literate Good Citizen Book Snob Non-Reader Fad Reader What Kind of Reader Are You?Quiz Created on GoToQuiz

About my libraryAfter all those years of trying anything on paper I now head for the Literary Fiction shelves, though I also enjoy literary criticism and any interesting non-fiction. I've got a bit of a weakness for historical novels especially any set in Victorian times and I also read a lot of non-fiction about the 19th century. I'm also fanatical about the wonderful women writers of the inter-war period, such as Winifred Holtby, Vera Brittain, Storm Jameson, Sylvia Townsend Warner etc.

My library only includes books that I own or have owned since I started LT-ing. If I sell or give away a book I tag it as such but it remains in my LT library to remind me that I've read it once and shouldn't go out and buy it again!

My rating system:
Any number of stars at all means the book is well worth a read.
* Above average
** A good, satisfying read
*** Book has something special about it
**** Very nearly as good as it gets
***** A perfect book. Cannot fault it in any way.
No stars - could mean I found it boring, pointless and not worth the effort of entering a rating. Could also mean I haven't read it yet or just that I haven't got round to rating it yet.

Oh, and to be honest (because I wouldn't really want to mislead anyone) books by authors I know usually get a five star rating - a) for being wonderful people and b) because nobody I know would write a bad book and c) because their books are fine examples of the literary art (think I've covered all bases there).