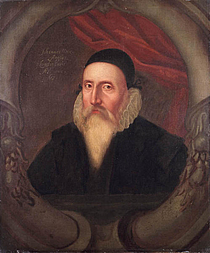 Real Name
John Dee
About My Library
Dee's library of some 4,000 volumes was the largest collected by a single person in England to that time. Dr. Julian Roberts has written of the collection "Dee’s omnivorous reading (demonstrated by his characterestic annotation) and the availability of his library to others fed many of the intellectual streams of Elizabethan England, and he was well known to continental scholars."

The library was unlike those of contemporaries in its size, ambition and in the relatively small number of volumes devoted to Theology or Law. It was notably up to date and reflected his desire to combine the best of ancient learning with the latest scholarship. It was frequently consulted by his closest friend, the poet and courtier Edward Dyer and by Raleigh, Leicester, the elder and younger Hakluyt, Thomas Digges, William Camden, William Bourne, Thomas Harriot, Robert Record and Dee’s pupil, Sir Philip Sidney."

Roberts adds "The building of so large a library of scholarly works entailed the import of books into a country like England where learned publishing was under-developed. Many of Dee’s books were gifts but for other such as his vast Paracelsian library, he was (literally) indebted to the Birckmanns of Cologne and their agent Andreas Fremonsheim. Fremonsheim was probably responsible for the meticulously accurate catalogue of Dee’s Library made in 1583."

A monograph and bibliography of Dee's library was published as John Dee's Library Catalogue, edited by Julian Roberts and Andrew G. Watson (London: The Bibliographical Society, 1990).

For a good overview of John Dee's library see William H. Sherman 'John Dee, the politics of reading and writing in the English Renaissance.'
About Me
John Dee (1527-1609) was an English mathematician, natural philosopher, astrologer, and occultist, as well as a sometime advisor to Mary I and Elizabeth I. He graduated at St. John's College, Cambridge (bachelor's in 1545, master's in 1548), and studied on the Continent in 1547, 1548-1551 under Frisius, Ortelius, Mercator and others).

Dee made his large library at Mortlake available for scholarly research, and was closely involved with the training of English navigators during the early days of exploration. His own works include Perfect Arte of Navigation, as well as better-known tracts on natural philosophy and the occult (the Monas Hieroglyphica). Dee also edited the first English edition of Euclid's Elements in 1570.

With Edward Kelley, Dee traveled widely in Europe from 1583-89, spending time at the court of Holy Roman Emperor Rudolph II and in other regions. During this period his library suffered many serious depredations.

During the reign of Mary I, Dee proposed the creation of a national library; failing this, Dee built his own.