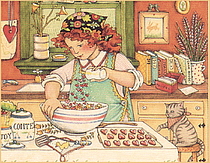 About meI've been collecting books most of my life, and I've rarely gotten rid of any. I live in a large slightly disorganized old home with my family, 30 some bookcases, surrounded by lots of things that interest me. I have a French stove and I love to bake, and I love to travel, especially to Paris and England. I knit, sew, garden, and collect books, dolls, baking pans, dishes, and art work. I am neither crafty nor politically correct.

About my libraryMy books are in mini-libraries all about the house, from the basement to the third floor. Whenever I think I have too many books, it doesn't seem to stop me from getting more books.