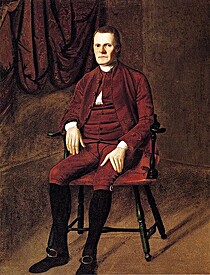 About meRoger Sherman (19 April 1721 - 23 July 1793), Connecticut cobbler, surveyor, and statesman. The only man to sign the Continental Association, the Declaration of Independence, the Articles of Confederation, and the Constitution.

Born in Newton, MA and raised in Stoughton, Sherman moved with his family to New Milford, CT following the death of his father in 1743. His formal education did not extend beyond grammar school, but Sherman was a quick study, and put his father's library and an acquaintance with Rev. Samuel Dunbar to good use.

In the Continental Congress from 1774-1781 and again in 1784, Sherman was a member of the "Committee of Five" to draft the Declaration of Independence (along with John Adams, Thomas Jefferson, Benjamin Franklin, and William Livingston, and on the committee to draft the Articles of Confederation. At the Constitutional Convention he is credited with proposing the so-called "Great Compromise."

From 1784 until his death he served as mayor of New Haven, and in 1790 he worked with Richard Law to revise the statutes of Connecticut. He served in the first House of Representatives (1789-1791), and then was elected to finish out the Senate term of William Samuel Johnson. He served from 13 June 1791 until his death.

About my librarySherman's library is documented in the 16 September 1793 inventory of his estate, filed in the New Haven District, CT Probate Records. Entries here are listed as they are found in the inventory, along with their appraised value. Sherman's library was valued at a total of £20, 3 shillings, 8 pence, out of a total inventory value of £233, 5 shillings and 3 3/4 pence.

Sherman's son-in-law Simeon Baldwin and grandson George Frisbie Hoar appear to have inherited several of the books listed here, as surviving copies bear their names. Where copies have survived, this is noted in the Comments field.