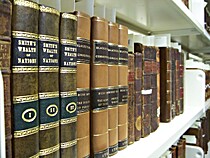 Real Name
Union College
About My Library
Collections: The collections used here are intended to show the sources of the books in the first library, their presence in the 1799 Catalogue, and whether the current copy is original or a replacement (or if a replacement copy is still sought). You'll notice some overlaps or areas of non-overlap; certain books that were ordered didn't arrive, while others arrived that weren't ordered.

Again here you may notice some oddities: why is John Bruce's Elements of the science of ethics, on the principles of natural philosophy listed under Divinity, for example? In cases where the title does not appear in the 1799 Catalogue, tags have been added as appropriate.

Bibliographic Data: In the Comments field for each title you'll find a wealth of data, including the "First Purchase" number, information on the format and binding of the volume(s), the original source of the title and provenance of the current copy, notes on original prices, how the title appears in the various records, and any marginalia or other evidence of readership found in the original volumes. References to ESTC and information on other editions of the work are also included.

A note on abbreviations: TM refers to the Union College Trustees' Minutes; FP is "First Purchase."

Evidence of Readership: More than two thirds of the original copies contain some marks left by generations of Union College students, from small tick marks, underlining, signatures, corrections, textual commentaries, manicules, doodles and drawings, mathematical exercises, ribaldry, and even a poetic denunciation of Shakespeare for the tragic end of Romeo and Juliet. Full notes on these are included in the Comments field for each work; there are also selected images in the photo gallery.
About Me
This catalog documents the first library of Union College, known as the "First Purchase." Acquired between 1795 and 1799 from booksellers in Albany, Philadelphia, and London, this library marks one of the first times that an American educational institution actively collected a library, as compared to earlier institutional collections, which were mostly accumulated by donation. This distinction is vitally important in understanding the content of Union’s library. The men responsible for its creation sought current books of immediate educational and practical relevance to the students and faculty; Union’s library, quite intentionally, looks much different from its colonial predecessors and even from most of its early national contemporaries.

The source records for this catalogue include minutes of Union College trustee meetings, correspondence between Union's first president and Philadelphia bookseller William Young, invoices and packing lists, and a manuscript catalogue of the library made in 1799.

In June 1933, 167 volumes from the original library were collected by Codman Hislop, and further titles were identified in the 1960s. In 1998, Union librarian T.G. McFadden began a concerted effort to identify additional titles, and to begin the recreation of the library by purchasing copies of titles which had been lost from the original collection. That effort continues, and currently just 52 titles remain to be added.

Union's first library is the subject of Jeremy Dibbell's "'A Library of the Most Celebrated & Approved Authors': The First Purchase Collection of Union College, An Introduction and Bibliographic Catalogue" (Masters' Thesis, Simmons College, 2007 - electronic version), which was published in part in the November 2008 issue of Libraries & the Cultural Record. The bibliographic data included in the original catalogue is now being enhanced and augmented using LibraryThing (the online records here should be considered more up-to-date than the 2007 version).

If you have additional information about Union's first library, or any questions/comments/concerns/&c., please contact Jeremy Dibbell.
Location
Schenectady, NY

UnionFirstPurchase added:
An inquiry into the beauties of painting; and into the merits of the most celebrated painters, ancient and modern by Daniel Webb

UnionFirstPurchase added:
The works of Virgil: translated into English verse by Mr. Dryden. In four volumes by Virgil

UnionFirstPurchase added:
Treaty of amity, commerce, and navigation, between His Britannic Majesty, and the United States of America, conditionally ratified by the Senate of the United States, at Philadelphia, June 24, 1795. To which is annexed, a copious index

UnionFirstPurchase added:
The modern part of an universal history; from the earliest account of time. Compiled from original writers. By the authors of The antient Part by George Sale