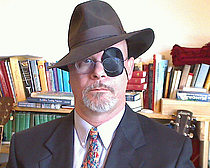 About meJust a nut who thinks he can write poetry. Though I belong to several social networking sites, I'm not much of a networker. I like people, but tend to go off on my own both physically and intellectually. The social network memberships, including this one, are feeble attempts to antidote my anti-social tendencies.

About my libraryAfter an initial burst of adding books time has become and issue. Still a few hundred to go.

I've sold nearly the entire thing twice. The last time I sold it, about 13 years ago when I moved from New York to California, there were about 5,000 books, of which I only kept a couple hundred based more on what I thought would be hardest to find again than on what I liked best. Of course, I made errors in my forecast.

But now, once again, it's crowding me out of my house. But this time I won't sell it.

Currently readingGod's Crucible: Islam and the Making of Europe, 570-1215 by David Levering Lewis
Meter in Poetry: A New Theory by Nigel Fabb
Dudjom Lingpa's Visions of the Great Perfection by Dudjom Lingpa