HomeGroupsTalkExploreZeitgeist
This site uses cookies to deliver our services, improve performance, for analytics, and (if not signed in) for advertising. By using LibraryThing you acknowledge that you have read and understand our Terms of Service and Privacy Policy. Your use of the site and services is subject to these policies and terms.
lawbod Profile Books Charts & Graphs Reviews Gallery 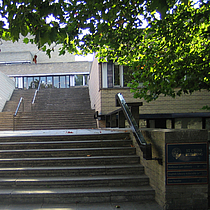 About my libraryBodleian Law Library is part of the Bodleian Libraries (see http://www.bodleian.ox.ac.uk/) Generally referred to by students as the "Law Bod," it was opened on 17 October 1964 as a dependent library of the Bodleian Library in a separate site on Manor Road, Oxford. Its building, the St Cross Building, (architects Sir Leslie Martin, and Sir Colin St John Wilson) also houses the Law Faculty, the English Faculty and its Library, various lecture theatres and seminar rooms. The Law Library itself occupies 5215 sq. metres of the building, holding c.450,000 volumes, and seating over 400 readers.
The Law Bod is adding some of its recent accessions (those published 2000 onwards, deleting record of previous editions when we have received a later one)to Library Thing. We had a brief "vacation" from using Library thing July 2011 - January 2012 because of changes to our own IT. We resumed in February 2012.