HomeGroupsTalkMoreZeitgeist
This site uses cookies to deliver our services, improve performance, for analytics, and (if not signed in) for advertising. By using LibraryThing you acknowledge that you have read and understand our Terms of Service and Privacy Policy. Your use of the site and services is subject to these policies and terms.
lithicbee Profile Books Charts & Graphs Reviews 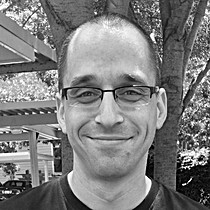 About meAndy Goldman has been writing since he was a little kid bashing out stories on his typewriter. They were often incredibly silly firsthand accounts of the adventures of his Transformers, G.I. Joe, and Star Wars action figures. Fast forward thirty years and Andy is still playing with toys and telling stories, much to his delight. The typewriter, alas, did not survive.
One or two other things have changed in the interim, the most important being his marriage to a wonderful, supportive wife, and the introduction of two beautiful, intelligent, and spirited daughters who very much encourage Dad's toy-buying habit, especially when it comes to Lego.
Andy’s work is heavily influenced by growing up in the 80s and 90s, and mixes western SFF with manga and anime. If he had to list the ancestry of The Only City Left series, three works would loom large: Asimov’s Foundation series, the original Star Wars trilogy, and Studio Ghibli’s The Cat Returns.
Andy hopes readers enjoy adventuring in the fantastical worlds inside his head for years to come.

About my libraryOver the years, I've had to give up most of my books due to our semi-nomadic lifestyle. They went to the library (many, many boxes) and friends, not without a tear or two shed, let me tell you. LibraryThing has let me keep track of everything I once owned. Who knows. Maybe someday I will settle down and start all over agin.