HomeGroupsTalkExploreZeitgeist
This site uses cookies to deliver our services, improve performance, for analytics, and (if not signed in) for advertising. By using LibraryThing you acknowledge that you have read and understand our Terms of Service and Privacy Policy. Your use of the site and services is subject to these policies and terms.
markell Profile Books Charts & Graphs Reviews Gallery 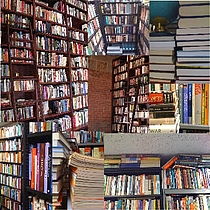 About meI'm a professor of political theory at Cornell University and a compulsive maker of lists. I probably spend more time reading books than pursuing them, but just barely.

• What I'm collecting these days: neglected classics of twentieth-century social and political thought in early editions; Arendtiana; runs of some leftish political and literary periodicals. And anything else I can't resist.

• About the "Arendt: Works" collection: this includes books and pamphlets published under Hannah Arendt's name, as well as periodicals in which her articles and reviews appear, conference proceedings in which she is represented, books she edited at Schocken, posthumously published material from her archive, etc. -- but not books about her and her work. For that, see the tag "Arendt."

• The library was founded in 1987, when Leslie Lipson, then a professor emeritus of Political Science at Berkeley who was teaching my freshman seminar, handed me a couple of spare desk copies of good books that he had lying around his office and said: "I assume you'll be starting a library?"

• With the advent of LibraryThing Local, much of my list of "sources" has moved to "favorite bookstores." But that's mostly limited to bookstores that still exist. So here's a memorial to some favorite places now defunct, many of which were gone before LT Local came to be....

• What? I warned you about the lists.

GroupsChicagoans, Philosophy and Theory, The University of Chicago

Currently readingThe Human Condition by Hannah Arendt
Through the Children's Gate: A Home in New York by Adam Gopnik