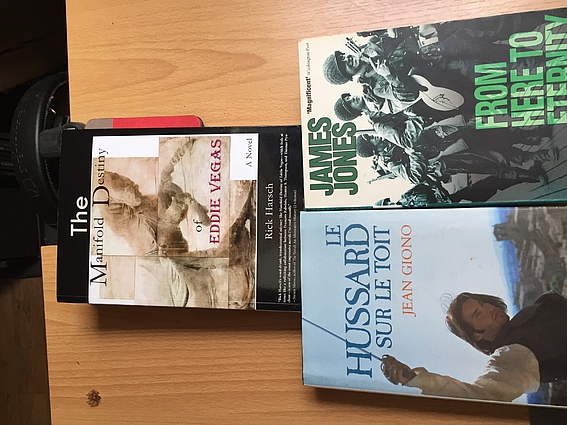 Rick Harsch's book The Manifold Destiny of Eddie Vegas arrived in the post today, also From here to Eternity and I am reading Le Hussard Sur Le Toit - That should keep me busy for the next couple of weeks.

Glad to see these getting up here.

A recent newspaper article reminded me of the English writer-biographer A.N. Wilson. His name was not unfamiliar, so I looked him up in my library and yes, I had one of his books on my stacks: “Dante in Love”. It is a nice - looking illustrated hardcover, first edition and it seems that I purchased or received it immediately after its publication, in 2011. As I did not remember to have read it from front to back, I must have probably just dipped in, got bored and shelved it away. I gave it a 2 and 1/2 stars’ appreciation on LT. Not very generous and not fair, as I now understand after a second reading.

>7 Macumbeira: I am convinced by your review that I would enjoy Dante in Love I think its on my bookshelves somewhere.

Lost on a bookshelf...

“It is exactly like the story of my mother's chimpanzee. When she bought him, he was skinny, he stank of misery, but I have never seen such a loving monkey. We gave him coconuts, we fed him bananas, he became as strong as a Turk, he slapped the maid. We had to call the fire department ... "

I have not yet read anything by Marcel Pagnol, but this afternoon I am going to the new bookshop opening today in Marciac............... A big occasion for the town.

A new bookshop opening should be celebrated as the birth of a child !

>7 Macumbeira:
I liked A. N. Wilson's Vicar of Sorrows. Also he has an ex-wife and two daughters who are significant authors. 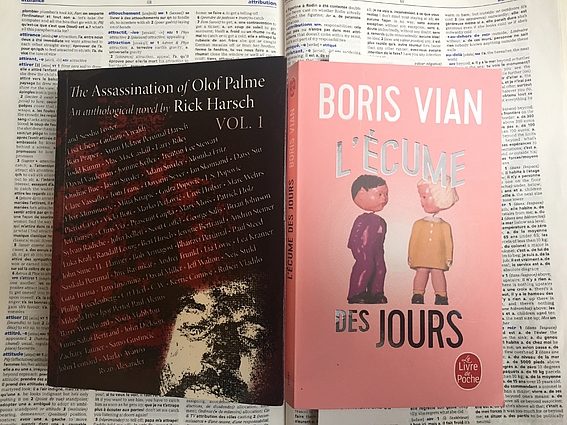 Appearing on a desk near me

My first reaction when turning the pages of the "Martian Chronicles" was, that even after a lifetime of reading, classic fiction can still surprise, entertain and even delight the most blasé of readers. Now nearly three quarters of a century old, we must acknowledge that Bradbury’s "Chronicles" have aged surprisingly well. The book is certainly as enjoyable, jolting and actual today, as it was when its chapters first appeared in the Planet- and Wonder stories magazines shortly after the War.

A firmly established Classic since long, the book might even have improved over the years. The time elapsed since publication has added a certain hue of innocent boyhood-charm to the pages, albeit darkened with a strange patina of nostalgia and dismay.

Published in 1951, a mere 6 years after the Earth blasted into the Atomic Age and a decade before our first hesitating flea hops into outer space, the novel has lost nothing of its urgency. It raises concerns indeed over values and doings that still worry us today: Racial oppression and exploitation, genocide and colonization, nuclear war and militarism and even planetary pandemics. Some chapters, with recent occurrences in mind, have the emotional impact of a Biblical text.

I read that “the chronicles” was a book readers liked to "carry with them over a lifetime." And I can easily understand this. Somehow these chapters stick and keep ghosting in the reader’s mind. Bradbury understood this attraction because the "Chronicles", rather than a work of science fiction, had the allures of a myth or a fable.

With only 305 pages and 26 short chapters the “Chronicles” invite easy reading. Even more so because each chapter is a short-story, very loosely related to the previous or the next. One can dip into any chapter without need to have an overall comprehension or an overview of a storyline. The Martian Chronicles are in fact what is called a fix-up, a novel created by combining several unrelated short-stories. Some short interstitial chapters, frame stories an and a bit of editing here and there have done the magic of organizing it all into a composite novel.

The lesser effort in reading allows more time for pondering over the stories told.
The general story - line is clear: a sequence of Mankind's efforts to land on, explore, understand and colonize the planet Mars. That the colonization of Mars echoes chapters of the colonization on Earth is of course intentioned. Parallels can easily be detected within our history - books, from the Pilgrim Fathers to the Indian Wars, from Jim Crow laws to Hiroshima.

But when meeting the Martians in the future, unbiased by our nationalities, free from our history, our culture and our skin color, and strengthened this time by our Scientific and Historical knowledge, will Man act differently this time?

>17 Macumbeira: enjoyed that Mac - you have captured the atmosphere of the chronicles which I think is unique. thumbed

I felt the same time when I read it for the first time just a few years back. But I always seem to feel that way about Bradbury.

Just received Rick's last book. Not only is it very entertaining, the book itself looks marvelous. It is really a neat, colorful and well made edition. a Jewel

>21 Macumbeira: I can't keep up with the Rick Harsch oeuvre - happy reading Mac