HomeGroupsTalkExploreZeitgeist
This site uses cookies to deliver our services, improve performance, for analytics, and (if not signed in) for advertising. By using LibraryThing you acknowledge that you have read and understand our Terms of Service and Privacy Policy. Your use of the site and services is subject to these policies and terms.
MrJack Profile Books Charts & Graphs Reviews Gallery 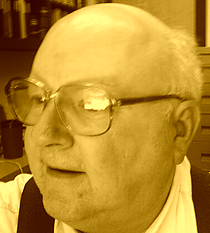 About meI'm an old codger and, like most LibraryThing-ers, a bibliophile. I have an eclectic formal education with degrees in Radio and Television, Bible, History, and Experimental Psychology. I am an ordained minister of the Gospel. I am a retired college educator and college administrator. I am a proficient, although self-taught, computer programmer and amateur magician. By those who have seen me perform, I'm known as "The World's Most Amateur Magician."

About my libraryWhen I retired, I gave half of my library away (N > 1,500 books). My giveaways included the bulk of my Bible commentaries, Bible dictionaries, Bible encyclopedias, lexicons, concordances, Sunday School lesson annuals, theology books and sermon books, many of which were shipped in barrels to New Zealand with a graduating senior. (I now use eBooks, CD-ROMS, the Internet, and PDF downloads for my Bible study and sermon/lesson preparations. For example, I downloaded the complete, still-in-copyright, Bible Study Textbook Series -- "The Old Green Commentaries" -- freely available at no cost from College Press at http://www.collegepress.com). My old psychology textbooks and academic reading materials went to the Johnson Bible College library, to faculty and students, and to McKays Used Book Store.

The paper and ink books that remain on my shelves are mostly about investing, computer programming, scientific/technical pursuits, psychology, mathematics, statistical methods, magic tricks, history, Stone/Campbell Restoration Movement, daily devotions, practical ministries, and a mishmash of other curiosities, including a smattering of fiction. Many of my computer programming books are outdated but still precious to me because I am a self-taught programmer and these books were my dear teachers.

My ratings are taken from the Netflix Star Rating system:

I tend to use integers only -- no fractional ratings. I'm inclined to "really like" most of my books.

In addition to my physical library, by scouring the Internet I am building a virtual collection of old magic books, long out of print, now retrievable because they have been digitally archived in Portable Document Format (Adobe PDF) and EPUB Electronic Publications by Google, Microsoft, Online Books Library at the University of Pennsylvania, Project Gutenberg, Internet Archive, Open Library, and other rescuers of books out of copyright. Here is what I have downloaded as of August 2008:

A Magician's Tour Up and Down and Round About the Earth, Being the Life and Adventures of the American Nostradamus, Harry Kellar (1886) [by Himself]. Edited by His Faithful "Familiar," "Satan, Junior." [Harry Kellar was the Dean of American Magicians, the successor of Robert Heller and the predecessor of Howard Thurston and Harry Houdini.]
http://tinyurl.com/57peat

Around the World with a Magician and a Juggler. Unique Experiences in Many Lands (1891). From the Papers of the late Baron Hartwig Seeman, "The Emperor of Magicians," and William D'Alvini, Juggler, "Jap of Japs" by Hardin J. Burlingame.
http://tinyurl.com/5zzye2

Artifice, Ruse and Subterfuge at the Card Table: A Treatise on the Science and Art of Manipulating Cards (aka The Expert at the Card Table; originally published 1902) by S. W. Erdnase.
http://tinyurl.com/6odfcw

Automata Old and New (1893) by Conrad William Cooke, Mechanick to the Sette of Odd Volumes, Delivered at a Meeting of the Sette held at Limmer's Hotel, on Friday, November 6th, 1891.
http://tinyurl.com/68pa9w

Chymical, Natural, and Physical Magic Intended for the Instruction and Entertainment of Juveniles during the Holiday Vacation (1865) by George William Septimus Piesse.
http://tinyurl.com/5bj8on

Conjuring for Amateurs: A Practical Treatise on How to Perform Modern Tricks (1901) by Ellis Stanyon.
http://tinyurl.com/6ntlbx

Endless Amusement: a collection of nearly 400 entertaining experiments in various branches of science; including acoustics, arithmetic, chemistry, electricity, hydraulics, hydrostatics, magnetism, mechanics, optics; wonders of the air-pump; all the popular tricks and changes of the cards, &c., &c., to which is added, a complete system of pyrotechny, or, the art of making fire-works; the whole so clearly explained as to be within the reach of the most limited capacity; with illustrations (1847).
http://tinyurl.com/6f4jqk

Facts and Mysteries of Spiritism: Learned by a Seven Years' Experience and Investigation [with a Sequel] (1885) by Joseph Hartman (Harry Houdini Collection).
http://tinyurl.com/6o9vf5

Hellerism, Second-sight Mystery, Supernatural Vision Or Second-Sight. What Is It? A Mystery. A Complete Manual for Teaching this Peculiar Art (1884) by Harry Hermon, Robert Heller.
http://tinyurl.com/5q8ehk

Joe Strong the Boy Wizard or the Mysteries of Magic Exposed (1916) by Vance Barnum. [Interesting novel which gives the 'trade secrets' of many conjuring tricks.]
http://tinyurl.com/5uxrw8

Lives of the Necromancers: or, an account of the most eminent persons in successive ages, who have claimed for themselves, or to whom has been imputed by others, the exercise of magical power (1834) by William Godwin.
http://tinyurl.com/5b2zp9

Peerless prestidigitation: being a collection of entirely new ideas and effects in the fascinating art of modern magic (c1910) by Herbert De Caston.
http://tinyurl.com/55vuxj

Philosophumena or the refutation of all heresies, formerly attributed to Origen, but now to Hippolytus, bishop and martyr, who flourished about 220 A.D. Translated from the text of Cruice, Volume 1 (1921) by F. Legge.
http://tinyurl.com/5ep24k

Rational recreations, in which the principles of numbers and natural philosophy are clearly and copiously elucidated, by a series of easy, entertaining, interesting experiments, among which are all those commonly performed with the cards (Vol. 2, third edition, corrected, 1787) by W. Hooper.
http://tinyurl.com/6jttjw

Sealed mysteries: explaining the latest card mysteries and spirit tricks made public for the first time, with directions for constructing trick cards (c1911) by Burling Hull. [Burling Hull was the inventor of the Svengali deck of cards which he patented in 1909. Mr. Hull tells about his invention in this book, revealing the secret working of the Svengali trick deck.]
http://tinyurl.com/6ayqa5

Si Stebbins card tricks and the way they are performed (19--) by Si Stebbins.
http://tinyurl.com/6xer92

Sleights; being a number of incidental effects, tricks, sleights, moves and passes, for purposes ranging from impromptu to platform performances (c1914) by Burling Hull.
http://tinyurl.com/5erjts

Some modern conjuring; a series of original experiments in the magic art (1909) by Donald Holmes.
http://tinyurl.com/5mrgyv

Stories of the Magicians: Thalaba and the Magicians of the Domdaniel, Rustem and the Genii, Kehama and his Sorceries (c1886) by Alfred J. Church.
http://tinyurl.com/5cmb7d

The Anatomie of Legerdemain, or, The Art of Iuggling fet forth in his proper colours, fully, plainely, and exactly, fo that an ignrant perfon may thereby learne the full perfection of the fame, after a little practife Vnto each Tricke is added the figure, where it is needfull for inftruction (1634) by Hocus Pocus Junior. [This is the first illustrated book of magic tricks in the English language. Hocus Pocus Junior explains magic tricks with patter as they were performed in the early seventeenth century, such as the cups and balls. The book covers sleight-of-hand, gimmicks, comedy, and the use of confederates -- props and methods still in use by magicians today.]
http://www.greatscotmagic.com/magicshop/hocus.html

The Art of Iugling or Legerdemaine. Wherein is deciphered, all the conueyances of Legerdemaine and Iugling, how they are effected, & wherin they chiefly consist. Cautions to beware of cheating at Cardes and Dice. The detection of the beggerly Art of Alcumistry, &, The foppery of foolish cousoning Charmes. All tending to mirth and recreation, especially for those that desire to haue the insight and priuate practise thereof (1612) By S. R. [Written in Elizabethan English, this is the first book in English entirely devoted to conjuring and prestidigitation, describing tricks and sleights that are still employed by magicians today. No illustrations.]
http://www.gutenberg.org/etext/12343 [Project Gutenberg]

The Blossom and the Fruit: A True Story of a Black Magician (Occult Series) (1889) by Mabel Collins.
http://tinyurl.com/5fs2qq

The Compleat Gamester: In Three Parts, First Written for the Use of the Young Princesses by Richard Seymour and now carefully revised, very much enlarged and improved, agreeable to the present method of playing the several games (Eighth Edition, 1754) by Charles Johnson.
http://tinyurl.com/6yg5km

The History of Magick by way of apology, for all the wise men who have unjustly been reputed magicians, from the creation, to the present age (1657), written in French by G. Naudaeus, Englished by J. Davies.
http://tinyurl.com/56tt5s

The Reports of the Magicians and Astrologers of Nineveh and Babylon in the British Museum: The Original Texts, Printed in Cuneiform Characters, Vol 1. Edited with Translations, Notes, Vocabulary, Index, and an Introduction, Vol 2 (1900) by R. Campbell Thompson.
http://tinyurl.com/5gqlmc

The Right Way to Do Wrong: An Exposé of Successful Criminals (1906) by Harry Houdini.
http://tinyurl.com/5jj4ya

White Magic: the Story of Maskelynes (19--) by Jasper Maskelyne.
http://tinyurl.com/5gz5fb