HomeGroupsTalkExploreZeitgeist
This site uses cookies to deliver our services, improve performance, for analytics, and (if not signed in) for advertising. By using LibraryThing you acknowledge that you have read and understand our Terms of Service and Privacy Policy. Your use of the site and services is subject to these policies and terms.
ShelfMonkey Profile Books Charts & Graphs Reviews Gallery 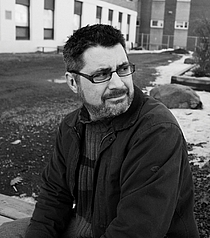 "I’ve often wondered how a novel’s characters might assess the book they’ve been thrust, unwillingly, into -­ like victims of a kidnapping. Well, now it’s actually happened to me. Yes, Eric McCormack appears as a character in Shelf Monkey. Once I got over the shock of finding myself there and settled in for the long haul, I thought: What a literate, witty, suspenseful, alternate world Corey Redekop’s created. I’m not so sure I want to be rescued from it!"Eric McCormack, author, The Dutch Wife

"A playful — yet very serious — ode to bibliophilia. Corey Redekop writes with energy and imagination, deft little jabs that go straight to the solar plexus. I laughed, and thought — a great deal — reading Shelf Monkey."Paul Quarrington, author, Galveston, The Ravine

"I read several promising first novels in 2007, all so different that I am unable to choose a favorite...Corey Redekop provided this year's gonzo fun with his Shelf Monkey, an utterly enjoyable novel about radical bookworms."Jeff Vandermeer, author, City of Saints and Madmen

"... stylistically playful ... reminiscent of Stephen King's approach in Carrie. That it feels neither redundant nor artificial is a testament to Redekop's control over his material and his ability to push his story effortlessly forward.What is most praiseworthy about Shelf Monkey is its tone, which is blackly comic, and not afraid to get its hands dirty ... bracing and edgy and skirts the line of cruelty without ever quite tripping over it ... Redekop plays with this tension nicely throughout the novel, providing a critique of a literary culture that prizes shallowness and false sentiment over an authentic engagement with difficult texts, while at the same time assuring all of us who love books that, whatever our literary tastes or predilictions, and for better or for worse, we're all in this together."Steven W. Beattie, That Shakespeherian Rag

"The surprises are worth the price of admission. There is a good bit of social satire, and the characters are exceptionally well drawn. Highly recommended."
Nick DiChario, author, The Valley of Day-Glo

About my libraryI live for books. I have a problem. I'm trying to deal with it.