HomeGroupsTalkExploreZeitgeist
This site uses cookies to deliver our services, improve performance, for analytics, and (if not signed in) for advertising. By using LibraryThing you acknowledge that you have read and understand our Terms of Service and Privacy Policy. Your use of the site and services is subject to these policies and terms.
Vanye Profile Books Charts & Graphs Reviews 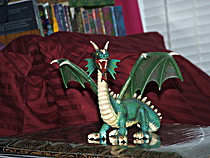 About meI am 70, retired & enjoying it & now since my house move (14 mos. ago)i do seem to get a lot more reading done than when i was working. I was a home health care worker & a cannery worker & substitite teacher. My teaching certificate was in History/Earth Science/Political Science, however now i am only certified for subbbing (for life). I had read mainly non-fiction until the last 10 yrs. When I discovered Fantasy (Tolkien, Lewis, Pullman, Pratchett etc.) I live by myself in an apartment in eastern Washington state in Yakima, a city of about 85,000. I find that i enjoy city life as everything in the city is acessible by public transport. Having no one else in the household lets me do as i wish on my own schedule w/o depending on anyone else or on their schedules. My car has been sitting in the same spot for the last 5 mos. & i am going to sell it.

About my libraryIn September of 2005 our house burned down & most of my library w/it 1000's of books & NG mags. My Tolkien was elsewhere, thank goodness. Since then I've been rebuilding my library by prowling the used bookstores & 2nd hand stores. I now have nearly 600 books & my book shelves are stuffed. That does not mean i shall quit buying books however! Mainly I have earth science, history, & of course fantasy in my collection. I also collect rocks, minerals, post cards, non-bear Beanies, dragons, turkeys & lots of dust! As I now live in an apartment my space is somewhat limited mainly by the number of bookshelves i now own, but am working on expanding my capacity. I am closing down the rented storage unit i have rented for the past several years as i have a smaller & cheaper storage space here in the complex-but am taking some books, which i have recently declared excess, to a booksale the local YMCA has held as a fund raiser for the past 40+ years. Since i originally acquired them @ said sale it seems appropriate to take them back there. Of course it goes w/o saying that i will find some books at the sale which i will bring to live w/me for a while anyway. Right now i am reading a lot of books about the Middle Ages in general & the 12th Century in particular.

Currently readingTen Days That Shook the World (Modern Classics S.) by John Reed
Saving Fish from Drowning: A Novel (Ballantine Reader's Circle) by Amy Tan
Mysteries of the Middle Ages: And the Beginning of the Modern World (Hinges of History) by Thomas Cahill
The Pillars of the Earth by Ken Follett