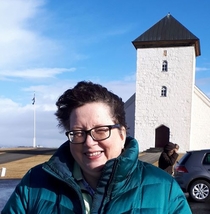 About meHi, I'm Allie. I'm in my mid-50s, twice divorced, with three grown children who have fled the nest, and two cats who have not. I live in Ontario, Canada, where I work as a travel agent for a large international corporate travel agency. In my spare time I read copious amounts of books, usually about a hundred a year. Also, I find deep relaxation in learning languages.

I love to travel, to play any sort of word game, and to take long walks with my camera. I'm fascinated with etymology, linguistics, paleoanthropology, and the British Royal Family.

About my libraryMy library is mainly fiction, and these days it's heavily weighted by Scandinavian crime novels. I've been reading them for over a decade, and collecting them has become one of life's real pleasures. There's also other stuff in my library: books about animals - particularly primates, biographies, some fantasy and science fiction, and a bit of true crime, books on the British royals, various religious studies texts, and a goodly amount of classic fiction.

Books that Have Influenced Me The Most (in random order)
The Spotted Sphinx by Joy Adamson
A Gentleman in Moscow by Amor Towles
The French Lieutenant's Woman by John Fowles
Long Walk to Freedom by Nelson Mandela
My Traitor's Heart by Rian Malan
The Nun's Story by Kathryn Hulme
Reflections of Eden: My Years with the Orangutans of Borneo by Birute Galdikas
Journey to the Centre of the Earth by Jules Verne
Autobiography by Agatha Christie
From the Mixed-up Files of Mrs. Basil E. Frankweiler by E.L. Konigsburg
The Chrysalids by John Wyndham (should probably be at the top of the list.)
The Princess of Burundi by Kjell Eriksson
Beowulf (Anonymous)

Currently readingThe Autobiography of Alice B. Toklas by Gertrude Stein
The Bus on Thursday by Shirley Barrett