Welcome to our group read of Robin Hobb's Realm of the Elderlings series. This is the thread to discuss Ship of Magic, the fourth book in the series and the start of a new trilogy, in August.

Link back to the main group read organisation thread with a full series listing and timetable. 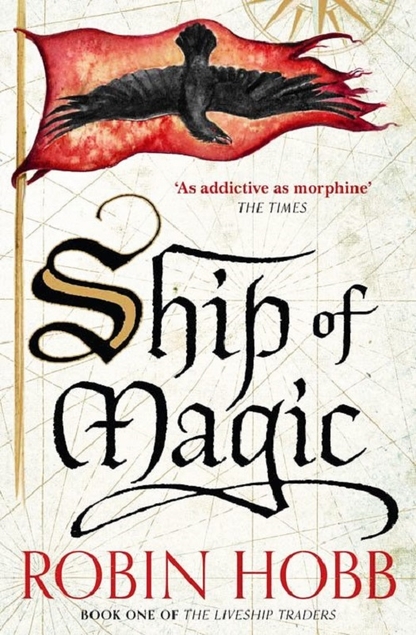 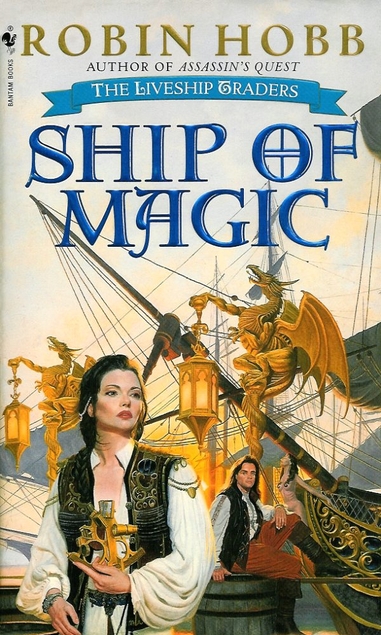 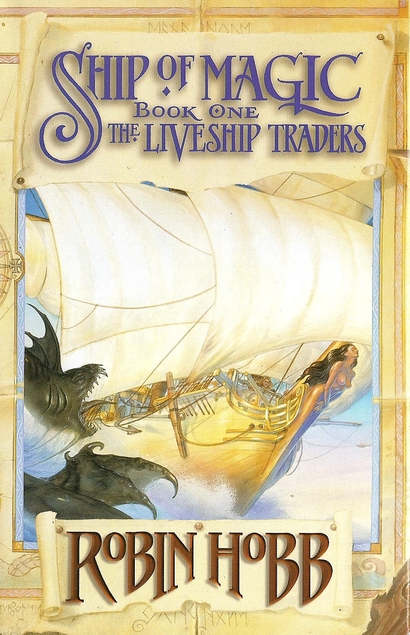 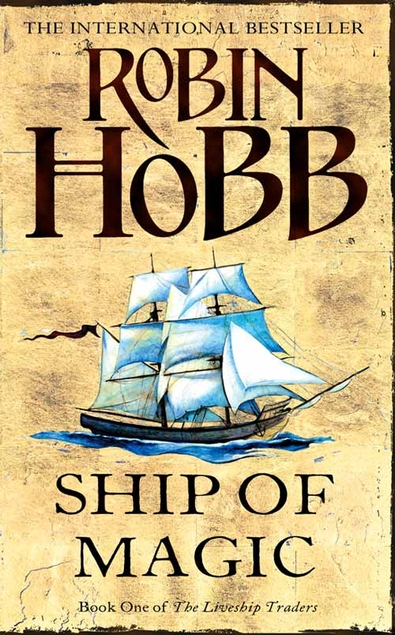 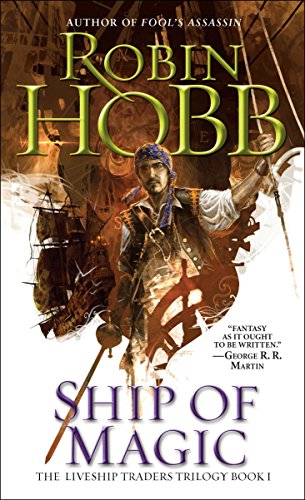 I wasn't planning to set a timetable for reading certain chapters by a certain date but I would say to use the spoiler tags (<spoiler>spoilery comments</spoiler>) and perhaps also include the chapter in bold so people who are reading along know whether it's safe to read the spoilers.

So who's in? I'm hoping to start reading later this week.

This was my first Robin Hobb - the cover of Mad Ship caught my attention at the Library and I rooted around until I found this one. The detailed violence set me back but did not stop me.

For me, I bought this to continue on after the Farseer trilogy. I remember really wanting to read Althea’s story and I couldn’t wait for the second one. I think this was my favourite in the whole series (as far as I read, that is).

I’m not sure when I’ll get to it, but it’s on the pile. Are we sticking with the original timetable of July-August or are we going with August-September?

I should have mentioned this will be the first time reading this trilogy for me. I'd only ever read the Farseer trilogy and two books of the Tawny Man trilogy.

>3 quondame: Would you say more violent than the Farseer trilogy Susan? Although I suppose that trilogy it wasn't the violence that bothered me so much as how bleak things seemed to get for Fitz at times.

>4 humouress: Let's say August-September as that gives more people a chance to catch up or join in. I will probably start and finish in August but will try to keep an eye on the thread for people reading in September.

>5 souloftherose: By the time I read the Farseer books I was acclimatized to Hobb's violence and level of detail so the impact was less. It was the first sudden grating of knife on bone that I still recall.

I had a lot of reading time yesterday so am 50% of the way through and about to start Chapter 17.

It took me a while to get into this one - I think because of the multiple POV. I was also frustrated by how long it took the Vestrit family .

Hello! I am keen to continue after the first trilogy, and by a weird stroke of luck have had this on my kindle for quite a while without realising exactly what it is! (Bought it as it was on offer or something). I've got my reading plate rather full at the moment but will start it as soon as I finish up one of my current reads! Yay, more violent and bleak but compelling fun!

I have Ship of Magic ready to go; I just have to crack it open.

>8 HanGerg:, >9 humouress: Would be lovely to have you join in whenever you manage to pick this one up!

Sorry, forgot to report back here to say I finished Ship of Magic and enjoyed it very much. It took me a while to get into the multiple viewpoints after just seeing things from Fitz's viewpoint in the Farseer trilogy. I felt that this story was less bleak than Fitz's (so far) anyway and am intrigued by the serpents and their search for .

I did make a start but we’ve had lots of visitors this month and one weekend was devoted to taking the kids and their friends to watch 3 days of the F1 race in Singapore. I remember I was really excited about this one the first time I read it and couldn’t wait for the next book; it must have been when it was first published.

I still haven't managed to read more than the introduction, where we're introduced to um... Winthrop? And we're due to leave for London in a couple of days time, so (as I don't take my precious paperbacks out of the house) I can't see myself finishing Ship of Magic until towards the end of October. How is everyone else going?

Is anyone else reading along on this one?

I think I've stalled, sorry. The problem is that the first time I read it, I was really looking forward to the second book but then I was a bit traumatised by it when I did read it. It kind of toned down my enjoyment of the whole series after that.

I loved this book! It was so much better for me than reading about Fitz. The characters seemed more intelligent and even though they couldn't always control what was happening to them, it seemed that they were aware and actively planning to make things better for themselves. I felt like Fitz just kind of blundered along and had problems because he never paid attention or realized what was happening to him. Frequently I thought Fitz brought most his troubles down upon himself and in that way, I guess Kyle might remind me a little of Fitz.

I've just finished the first and have the second from the library. >14 humouress: "I was really looking forward to the second book but then I was a bit traumatised by it when I did read it." So is it the second book traumatic?. I have to say I thought the first one had its deeply unpleasant moments and I may have to steel myself before continuing if things are going to get worse. I did enjoy it, but it feels like there's lots of suffering for us to vicariously endure before things can be resolved. The first trilogy was often like this, and it does make her books heavy going at times. But the characterisation is just so strong, and the dilemmas they face are so involving, I always end up coming back for more.

>14 humouress:, >16 HanGerg: Sorry to hear that Nina :-( As Hannah said, I am now slightly nervous about what's waiting for us in The Mad Ship, although so far I've found the Liveship series has put me through the emotional wringer less than the Fitz trilogy did.

>15 rretzler: Kyle was one of my least favourite characters from this book. But Malta was also incredibly frustrating to read about.

>16 HanGerg: 'But the characterisation is just so strong, and the dilemmas they face are so involving, I always end up coming back for more.'

Yes, I feel the same!

>17 souloftherose: "Kyle was one of my least favourite characters from this book. But Malta was also incredibly frustrating to read about."
Yes, agreed. I think they are both frustrating for the same reason, which is that they are deeply flawed but cannot see their own flaws, and instead blame everyone else around them for their mistakes. Unfortunately that rings very true to life. We all know plenty of people like that, or can see them in the news on a daily basis! Having said that, we do get some insights into how both are feeling. Kyle really has no redeeming features, but I think we can see with Malta that she is just a confused young girl at heart. Obviously she grew up in a slightly toxic environment where her mother was emotionally absent, her father domineering, and her grandfather worshipped whilst doing very little for the family.( I have real issues with Ephron Vestrit. I think one could successfully argue that all of the family's current woes could be laid firmly at his door).
I find pirate Captain Kennit a very hard character to be around too. He seems to have no redeeming features and learns nothing along the way. Quite why Etta and Sorcor are so smitten with him, and why Etta in particular is so fiercely loyal, I don't know, and find quite annoying. There's that awful line about Etta and Vivacia preening and proudly showing that they are the kept women of powerful men or something that felt like is set the feminist movement back about 5 years all on its own. Hard to take from a female writer. And Malta could be read as your classic Lolita type character, the seductive 13 year old that wilfully entraps poor hapless men. Her grandmother calls her a "predator" at one point. So, from a grooviness perspective, this book gets a definite "could do better" rating.

>18 HanGerg: Well, let me know if you ever find out what’s so fascinating about Kennit. I think Hobb had a soft spot for him. :0)

>17 souloftherose: >18 HanGerg: >19 humouress: Yes, Malta was incredibly frustrating to me as well - I found myself just wanting to shake her. I've already read the second book in this trilogy . I find myself alternately slightly liking Kennit and then disliking him quite a bit. It seems that Hobbs has him do things that one might think aren't so bad, but then she reveals his motivations and of course, they are purely selfish.

As far as the feminist movement, I think the reader must take that in context somewhat. I feel that these books are meant to take place in the past - now I realize that an author could do anything in a world that he/she wants, but I think Hobb is trying to put a little realism in them with regard to character's actions and other plot elements - wooden sailing vessels, pirates, etc., late 17th-century stuff. So of course, women would have little place in that sort of society, and some would act the way Etta and Vivacia and others did. I think by making Althea as strong a character as she is, this is an indication that Hobb really thinks women have an equal place in society. Althea is our heroine, and she has a non-stereotypical place in this society that is clearly male dominant. Too many dominant women might not ring true in a late 17th-century setting and would certainly make Althea's plight much less compelling. Plus it makes Etta's personality interesting - she is indeed a kept woman, which may have had a certain status in that society, but there is a strength about her that belies her kept status. This is just my opinion, so please feel free to disagree.

>19 humouress:, >20 rretzler: I agree that Kyle has no redeeming features - I'm uncertain whether I think Malta is going to develop any. I find Kennit quite intriguing as a character (and simultaneously quite repulsive). And yes, sometimes his actions aren't too bad but his motives are always selfish.

I think there are lots of ways this book 'could do better' in terms of feminism but I think overall I felt there were enough positive depictions of strong women (Althea, the Vestrit grandmother whose name I've temporarily forgotten, Ophelia) that I was willing to give the negative elements a pass. Maybe I should be more troubled by them and probably I would be with a more recent novel.....

Verdana StandardVerdana SmallSystem StandardSystem LargeGeorgia
This site uses cookies to deliver our services, improve performance, for analytics, and (if not signed in) for advertising. By using LibraryThing you acknowledge that you have read and understand our Terms of Service and Privacy Policy. Your use of the site and services is subject to these policies and terms.