Each month, we will visit a different state in the United States of America for the Monthly Reading Challenge in the Mystery & Suspense Extra! Group. This month, we head to the Pacific Northwest to a state that has been in the forefront of the news in recent weeks - Oregon.

Oregon is a state in the Pacific Northwest region on the West Coast of the United States. Its capital is Salem and its largest city is Portland. Oregon is ranked 9th in area at 98,381 square miles (254,806km square) and is the 27th in population with approximately 4.2 million residents as of 2019 (it is 39th in terms of density). The state's name likely comes from the Spanish when the area was part of the Viceroyalty of New Spain.

American Indians of successive cultures lived in Oregon with some evidence dating back as far as 13,200 years ago. By the 16th Century, Oregon was home to many Native American groups – chief among them being the Chinook, Klamath and Umpqua. The first Europeans (Juan Rodriguez Cabrillo of Spain) arrived in Oregon in 1543. Sir Francis Drake, an English explorer and privateer, briefly sought shelter in one of the many coves along Oregon's coast before sailing to what is now California. European exploration continued until the War of 1812. The Treaty of 1818 established joint British and American occupancy of the region west of the Rocky Mountains to the Pacific Ocean.

Starting in 1842-43, The Oregon Trail brought many new American settlers to the area – reigniting tensions with the British. The border between the United States and British North America was defined under the Oregon Treaty in 1846. On August 13, 1848, the Oregon Territory was officially organized. Illinois became the 21st US state on December 3, 1818.

In December 1844, Oregon passed its Black Exclusion Law which prohibits Blacks from entering the territory while simultaneously prohibiting slavery. Slave owner who brought their slaves with them were given 3 years before they were forced to free them. Any Blacks in the area after the law was passed were forced to leave and those who did not comply were arrested and beaten. They received no less than 20 and no more than 39 lashes to their bare back if they still did not leave and the process could be repeated every 6 months. Slavery played a major role in the territory's quest for statehood as members of Congress debated whether the state would be admitted as a "free" or a "slave" state. Eventually politicians from the south agreed to allow Oregon to enter as a "free" state in exchange for opening slavery to the southwest United States. Oregon was admitted to the union on February 14, 1859.

Industrial expansion began in earnest following the 1933-37 construction of the Bonneville Dam on the Columbia River. Hydroelectric power, food and lumber provided by Oregon helped fuel the development of the West. The northwest region of the state, where Liberty ships and aircraft carriers were constructed, benefited from the arrival of World War II.

Oregon is bordered to the east by Idaho, to the south by California and Nevada, to the west by the Pacific Ocean and to the north by Washington. Most of the northern border is the Columbia River, while the Snake River defines much of its eastern border with Idaho.

Oregon is one of the most geographically diverse states in the US marked by volcanoes, abundant bodies of water, dense evergreen and mixed forest, as well as high deserts and semi-arid shrublands. At 11,249 fee, Mount Hood, a stratovolcano, is the state's highest point. Oregon's only national park, Crater Lake National Park comprises the caldera surrounding Crater Lake, the deepest lake in the United States. 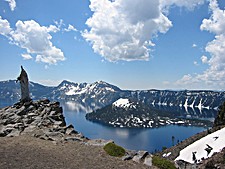 The state is the country's largest timber producer in the continuous US. Oregon's economy is also largely powered by agriculture, fishing and hydroelectric power. Technology is another of Oregon's major economic segments beginning in the 1970s with the establishment of the Silicon Forest and the expansion of Tektronix and Intel.

Oregon is home to the single largest organism in the world, Armillaria ostoyae, (the honey mushroom) a fungus that runs beneath 2,200 acres (8.9 km square) of the Malheur National Forest and is estimated to be over 2,400 years old.

Sportswear company Nike, Inc., headquartered in Beaverton, is the state's largest public corporation with an annual revenue of $30.6 billion.

Oregon has more ghost towns than any other state.

Oregon has one community named Brothers and another named Sisters. Both are in Deschutes County (There is no word on how they get along).

Scenic Silver FallS State Park has the highest concentration of waterfalls in the United States (approx 20 over 9,000 acres).

A Japanese submarine fired shells on Fort Stevens in 1942 making it the only hostile shelling of a military base on the US mainland during World War II and the first since the War of 1812. On May 5, 1945, 6 civilians were killed by a Japanese balloon bomb that exploded near Bly. They remained the only people on American soils whose deaths were attributed to an enemy balloon bomb explosion during World War II.

In 1994, Oregon became the first US state to legalize physician-assisted suicide through the Oregon Death with Dignity Act. Oregon's suicide rates are some of the highest in the nation.

Portland Oregon is known as the City of Roses. Its International Rose Test Garden boasts over 500 varieties, cultivated continuously since 1917.

The Oregon Trail is the longest of the overland routes used in the westward expansion of the United States. The Trail used from 1840 to 1860 began in Missouri and ended in Oregon. It was about 2,000 miles long.

Whorehouse Meadows in Harney County was exactly that during the days of the Old West. Setting up facilities under a canvas tent in the secluded meadow about a mile east of Fish Lake, they would then meet up with cattle and sheep herders. In the 1960s, the Bureau of Land Management issued a recreation map renaming the meadow "Naughty Girl Meadows." But in 1971, the Oregon Geographic Names Board took strong objection to the change and brought their argument before federal arbiters. After 10 years the old mane was restored in 1981.

Oregon residents own one-fourth of the country's total llama population.

• A Mystery/Suspense book with "Lake," "Rose," "Bomb," or "Water" in the title or has a waterfall, a lake, a rose or a volcano on the cover;

• A Mystery/Suspense book in which a character travels a long distance or a character who dies by suicide or the story takes place in the US Pacific Northwest;

• A Mystery/Suspense book where the author's initials (BOTH the first AND last) can be found in OREGON.

• A Mystery/Suspense book where the author's initials (BOTH the first AND last) can be found in OREGON.
The Crossing Places by Elly Griffiths; 8/13/2020; 3.5 stars 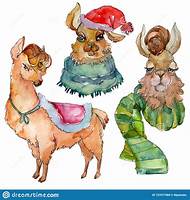 📌2. A Mystery/Suspense book in which a character travels a long distance or a character who dies by suicide or the story takes place in the US Pacific Northwest;
East of the Mountains - David Guterson - 5+★

📌3. A Mystery/Suspense book where the author's initials (BOTH the first AND last) can be found in OREGON.
The Westing Game - Ellen Raskin (E & R) 5★

I'm going to read The Girl in the Woods by Gregg Olsen. It takes place in the Pacific Northwest - Washington state - and both of the author's initials are in Oregon.

>5 Sergeirocks: Llamas are so much like some humans I know:) Some have such sweet, loving personalities and others can seem like a demon from Hell. We had one at the Zoo where I worked that would follow you round nudging you for apple slices that we carried in our pockets for "llama emergencies" and the other one would do his very best to bite any area not covered by clothing. We seldom took the "Demon" out walking when we had a lot of Zoo visitors since he wasn't choosy about who he sank his teeth into. They do have the sweetest little faces.

>1 bhabeck: I like it when you include the option of where the story takes place, e.g., Pacific Northwest. I enjoy trying to find books in or near the state you've chosen. Just my preference.

>7 gaylebutz: I'll make a note of it. I try to include either a similar type of location (ie large city for Illinois since Chicago was such a big part) or region like the midwest, southwest, etc along with some type of character/plot similarity in the 2nd bullet point.

Finished payment in blood by Elizabeth George.
initials in OREGON

>9 Sergeirocks: You'll enjoy it. It's not Vera or Jimmy Perez but it's diffidently totally, Ann Cleeves.

>10 nrmay: nice! I really enjoy the Inspector Lynley series...need to get back to it.

The Girl in the Woods by Gregg Olsen - 3.5 ★
Takes place in the Pacific Northwest - Washington state - and both of the author's initials are in Oregon.

The main charactor, the Gray Man, travels a long distance - starts out in St. Petersburg and ends up in Wash DC with stops in Finland, Sweden, Belgium, along the way.

All done! These are so much fun, Brenda and I had all excellent reads this month to complete it. Thank you so much. What are we going to do when we run out of states??? Maybe when they quit fighting in Washington they can add some more:)) Maybe we could do something with "presidents". I think we're okay for awhile though.

>15 Carol420: no worries on that score - I think we have another year and a half of states to go!

• A Mystery/Suspense book with "Lake," "Rose," "Bomb," or "Water" in the title or has a waterfall, a lake, a rose or a volcano on the cover;

🐲 A Mystery/Suspense book in which a character travels a long distance or a character who dies by suicide or the story takes place in the US Pacific Northwest;
Bone Crossed - Patricia Briggs - 4.5 Stars - 8/11/20 - set in Washington - this is primarily paranormal but series also has a mystery element

• A Mystery/Suspense book where the author's initials (BOTH the first AND last) can be found in OREGON.