Each month, we will visit a different state in the United States of America for the Monthly Reading Challenge in the Mystery & Suspense Extra! Group. This month, we head east and north to INDIANA.

History
Indiana is a U.S. state in the Midwestern United States. It is the 38th-largest by area and the 17th-most populous of the 50 United States. Its capital and largest city is Indianapolis. Indiana was admitted to the United States as the 19th state on December 11, 1816.

Various indigenous peoples inhabited Indiana for thousands of years, some of whom the U.S. government expelled between 1800 and 1836. Indiana received its name because the state was largely possessed by native tribes even after it was granted statehood. Indiana's name means "Land of the Indians", or simply "Indian Land". It also stems from Indiana's territorial history. On May 7, 1800, the United States Congress passed legislation to divide the Northwest Territory into two areas and named the western section the Indiana Territory. In 1816, when Congress passed an Enabling Act to begin the process of establishing statehood for Indiana, a part of this territorial land became the geographic area for the new state.

Since then, settlement patterns in Indiana have reflected regional cultural segmentation present in the Eastern United States; the state's northernmost tier was settled primarily by people from New England and New York, Central Indiana by migrants from the Mid-Atlantic states and adjacent Ohio, and Southern Indiana by settlers from the Upland South, particularly Kentucky and Tennessee.

During the American Civil War, Indiana became politically influential and played an important role in the affairs of the nation. Indiana was the first western state to mobilize for the United States in the war, and soldiers from Indiana participated in all the war's major engagements. The state provided 126 infantry regiments, 26 batteries of artillery and 13 regiments of cavalry to the Union.

In 1861, Indiana was assigned a quota of 7,500 men to join the Union Army. So many volunteered in the first call that thousands had to be turned away. Before the war ended, Indiana had contributed 208,367 men. Casualties were over 35% among these men: 24,416 lost their lives and over 50,000 more were wounded.

After the war, Indiana remained a largely agricultural state. Post-war industries included mining, including limestone extraction; meatpacking; food processing, such as milling grain, distilling it into alcohol; and the building of wagons, buggies, farm machinery, and hardware. However, the discovery of natural gas in the 1880s in northern Indiana led to an economic boom: the abundant and cheap fuel attracted heavy industry; the availability of jobs, in turn, attracted new settlers from other parts of the country as well as from Europe. This led to the rapid expansion of cities such as South Bend, Gary, Indianapolis, and Fort Wayne.

Indiana has a diverse economy with a gross state product of $377.1 billion in 2019. It has several metropolitan areas with populations greater than 100,000 and a number of smaller cities and towns. Indiana is home to professional sports teams, including the NFL's Indianapolis Colts and the NBA's Indiana Pacers, and hosts several notable competitive events, including the Indianapolis 500. 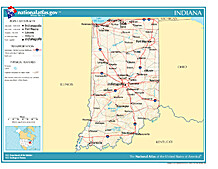 Deep below the earth in Southern Indiana is a sea of limestone that is one of the richest deposits of top-quality limestone found anywhere on earth. New York City’s Empire State Building and Rockefeller Center as well as the Pentagon, the U.S. Treasury, a dozen other government buildings in Washington D.C. as well as 14 state capitols around the nation are built from this sturdy, beautiful Indiana limestone. 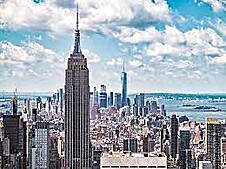 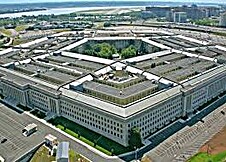 Fun Facts
A resident of Indiana is officially known as a Hoosier. The etymology of this word is disputed, but the leading theory, advanced by the Indiana Historical Bureau and the Indiana Historical Society, has its origin in Virginia, the Carolinas, and Tennessee (the Upland South) as a term for a backwoodsman, a rough countryman, or a country bumpkin.

Indiana is an important religious center.

Indiana is home to the 3rd largest population of Amish in the US.

Marcella Gruelle of Indianapolis created the Raggedy Ann doll in 1914.

There is a road in Amity, Indiana, with a gravesite right in the middle of it. In 1831, Nancy Kerlin Barnett (whose husband was a descendant of Pocahontas and John Rolfe) was buried on a hill that overlooked Sugar Creek. Others graves were established in the area, but plans to build a road through the site meant that the bodies would have to be moved. Barnett’s grandson guarded her grave with a shotgun while the others were moved, and the county officials eventually agreed to leave it be, building the road around the plot. The concrete slab protecting the grave and historical marker were added later. 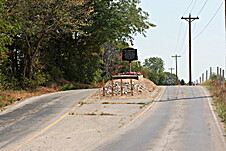 It’s where Johnny Appleseed is buried. The man who inspired the American folktale, John Chapman, died in Fort Wayne, Indiana, in 1845. There is a marked grave in what is now known as Johnny Appleseed Park

“America’s oldest magazine,” The Saturday Evening Post, is headquartered in Indianapolis. The magazine is probably best known for its iconic covers, 323 of which were painted by Norman Rockwell over the course of five decades. 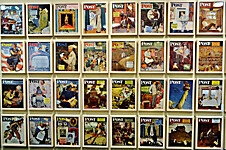 Benjamin Harrison (August 20, 1833 – March 13, 1901) was an American lawyer and politician who served as the 23rd president of the United States from 1889 to 1893. He was a grandson of the ninth president, William Henry Harrison, and a great-grandson of Benjamin Harrison V, a founding father who signed the United States Declaration of Independence. The Indiana General Assembly elected Harrison to a six-year term in the U.S. Senate, where he served from 1881 to 1887. A Republican, Harrison was elected to the presidency in 1888, defeating the Democratic incumbent, Grover Cleveland. Hallmarks of Harrison's administration included unprecedented economic legislation, including the McKinley Tariff, which imposed historic protective trade rates, and the Sherman Antitrust Act. Harrison also facilitated the creation of the national forest reserves through an amendment to the Land Revision Act of 1891. During his administration six western states were admitted to the Union. In addition, Harrison substantially strengthened and modernized the U.S. Navy and conducted an active foreign policy, but his proposals to secure federal education funding as well as voting rights enforcement for African Americans were unsuccessful. Historians rank him in the bottom half among U.S. presidents, though they do not question his commitment to personal and official integrity.

Thomas Hendricks, a Democrat from Shelbyville, served Indiana as a United States Senator, a United States representative, governor, and as Vice President under Grover Cleveland. Indiana has been the home of 5 vice presidents and one president.

A lot of famous performers and entertainers were born in Indiana. Janet Jackson, Michael Jackson, and the rest of the Jackson 5 were born and raised in northwestern Indiana, but they weren't the only ones. Kenneth "Babyface" Edmonds, Freddie Hubbard, Adam Lambert, John Mellencamp, David Lee Roth, Axl Rose, Izzy Stradlin, Deniece Williams, Scatman Crothers, and numerous other rock, jazz, and blues performers were born in the state. Comedians Red Skelton, Mike Epps, David Letterman, and Jim Gaffigan, and actors Florence Henderson, Shelley Long, and James Dean were also Hoosiers.

• A Mystery/Suspense book that takes place in a state that borders the Great Lakes OR involves a main character in a religious vocation (priest, nun, etc) OR has a character that dies; and

• A Mystery/Suspense book where the author's FIRST and LAST initial (no middle initials or names) can be found in INDIANA.

• A Mystery/Suspense book that takes place in a state that borders the Great Lakes OR involves a main character in a religious vocation (priest, nun, etc) OR has a character that dies; and

• A Mystery/Suspense book where the author's FIRST and LAST initial (no middle initials or names) can be found in INDIANA. 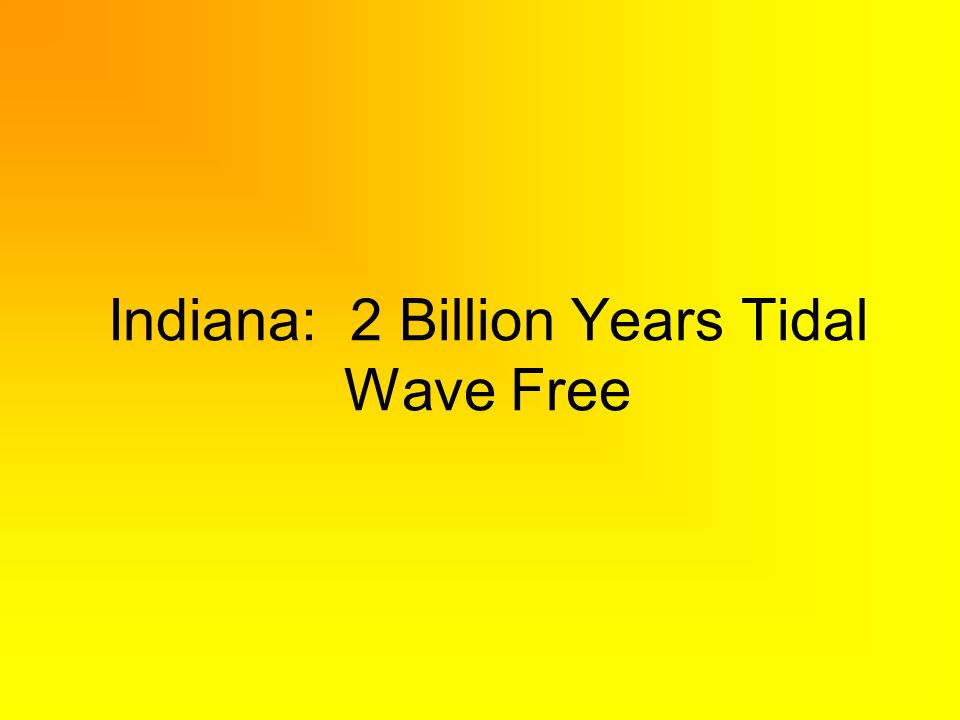 📌1.A Mystery/Suspense book with "Indian," "Music," "Grave," "Race," or "Saturday/Evening/Post" in the title OR has a picture of a racecar, a graveyard, or an apple on the cover;
Grave Sight - Charlaine Harris - 3★

📌2. A Mystery/Suspense book that takes place in a state that borders the Great Lakes OR involves a main character in a religious vocation (priest, nun, etc) OR has a character that dies.
The Other Sister - Sarah Zettel - 4★(Takes place in Michigan)

📌3. A Mystery/Suspense book where the author's FIRST and LAST initial (no middle initials or names) can be found in INDIANA
Death Sung Softly - David Archer - 3★ (A & D)

My sister and I went to Shipshewana in June. No one makes better fried chicken than the Amish.

>5 Olivermagnus: The food at the Blue Gate Restaurant is simply fantastic. There's just so much of it!! We tried the buffet downstairs the last time we were there. It's the same food as upstairs, but you can manage the main course better. However...be warned... there are at least 20 different kinds of dessert:)

Love your thing about them being "tidal wave free":)) Bet Arizona is too.

I'm going to read 13 Million Dollar Pop by David Levien.
It takes place in a state that borders the Great Lakes - Indiana.

The Caves of Steel - Isaac Asimov 4.5★s (Author’s initials in INDIANA)
Sidney Chambers and the Problem of Evil 4★s (Main character is a vicar)
Murder Being Once Done - Ruth Rendell 4★s (Graveyard on the book cover)

All done. Great trip to Indiana. Thanks Brenda.

Done - 13 Million Dollar Pop by David Levien 4★
It takes place in a state that borders the Great Lakes - Indiana. 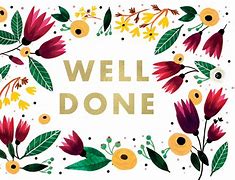