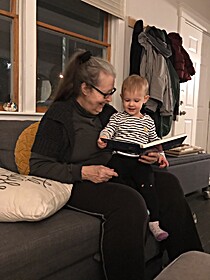 The Splendid and the Vile by Erik Larson
Network Effect by Martha Wells (Murderbot!)
Brown Girl Dreaming by Jacqueline Woodson

Doing Justice: A Prosecutor's Thoughts on Crime, Punishment, and the Rule of Law by Preet Bharara

2018
The Deepest Grave by Harry Bingham. Mystery
On Tyranny by Timothy Snyder. Nonfiction
So You Want to Talk About Race by Ijeoma Oluo. Nonfiction
The Girl in the Green Silk Gown by Seanan McGuire. Ghost Story
Old Man's War by John Scalzi. Scifi
The Murderbot Diaries 1-4 by Martha Wells. Scifi

2017
The Art of Racing in the Rain by Garth Stein. Literary Fiction
March: Book Three by John Lewis. Graphic Novel
Norse Mythology by Neil Gaiman. Fantasy
How the Marquis Got His Coat Back by Neil Gaiman. Fantasy screenplay
Astrophysics for People in a Hurry by Neil DeGrasse Tyson. Non-fiction: Science
The Girl With All the Gifts and The Boy on the Bridge, both by M. R. Carey. Horror
SeveneveS by Neal Stephenson. SciFi

2016
This Thing of Darkness and The Dead House by Harry Bingham. Mystery thriller.
The Wrong Side of Goodbye by Michael Connelly. Latest Bosch.
Dark Matter by Blake Crouch. Scifi/Thriller
Sapiens: A Brief History of Humankind by Yuval Noah Harari. Nonfiction: anthropology, humanities, polysci.
Angle of Repose by Wallace Stegner. Literature.

2015
Lamentation by C. J. Sansom (historical mystery
City of Stairs by Robert Jackson Bennett (scifi)
Being Mortal by Atul Gawande (audio) (nonfiction)
The Strange Death of Fiona Griffiths by Harry Bingham (mystery)
Written in Red and the rest of The Others series by Anne Bishop (urban fantasy)

2013
TILT A WHIRL and the rest of the John Ceepak mysteries by Chris Grabenstein (The books that gave me the most reading pleasure)
Fledgling by Octavia Butler (fantasy)
Beggar's Opera by Peggy Blair (mystery)
Midnight Riot by Ben Aaronovich (fantasy, mystery)
Angel's Blood and the rest of the Guild Hunter fantasies by Nalini Singh

2011
DOC by Mary Doria Russell (historical fiction)
Maus II: And Here My Troubles Began by Art Spiegelman (graphic novel)
The Cabinet of Curiosities by Preston and Child (thriller)
Essential Dykes to Watch Out For by Alison Bechdel (graphic novel)
Dog On It by Spencer Quinn (humorous mystery)

About my libraryMost of the books I read these days are eAudios or eBooks, mostly borrowed from the library, and I've begun to add those to my LT library, marking them as "borrowed," so that they count on the ER algorithm. I'm also fortunate to have great LT friends who give me books after they've read them or sometimes "just because." Thank you!

Currently readingFight Like a Mother: How a Grassroots Movement Took on the Gun Lobby and Why Women Will Change the World by Shannon Watts