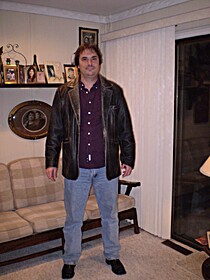 About meI am a writer and an extensive reader. I've published over 30 short stories and a dozen or so essays, mostly science fiction, fantasy, horror, and mystery, in venues such as Alienskin, Heliotrope, City Slab, Magisteria, Kings of the Night, the Internet Review of Science Fiction, The New York Review of Science Fiction, Electric Spec, Plots with Guns, Blue Murder, Dark Krypt, Kings of the Night, etc. I live in Jersey, and I have a day job.

About my libraryMy library reflects my writing interests. I have a lot of science fiction, fantasy, 19th century American Literature, and hardboiled mysteries. I also have a good selection of English Literature, and the Greek and Roman classics. I also own books of literary criticism, philosophy, science and technology. I still believe in the humanist concept of being broadly read. I don't have time to read all of it, of course, but I'm doing my best. I'm slowly uploading the library, but it's going to be awhile yet. . . . I also have thousands of pulp science fiction magazines such as Fantastic, Astounding/Analog, Amazing, Startling Stories, Galaxy, Worlds of Tomorrow. I don't have any of the magazines up yet; they're all on a spreadsheet. Not sure if I can put them up; I have thousands,and they don't have ISBNs. I'm becoming quite fond of this site; I may eventually blog on collecting pulp magazines and books. Stay tuned.