HomeGroupsTalkMoreZeitgeist
This site uses cookies to deliver our services, improve performance, for analytics, and (if not signed in) for advertising. By using LibraryThing you acknowledge that you have read and understand our Terms of Service and Privacy Policy. Your use of the site and services is subject to these policies and terms.
Delirium9 Profile Books Statistics Reviews Clouds 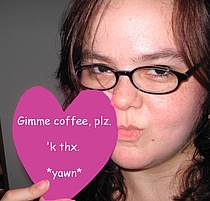 For a long time I had this for a profile picture:

She's Door, a character from the graphic novel Neverwhere (adapted from Neil Gaiman's eponymous novel, and written by Mike Carey, with art by Glenn Fabry.)

I've also had this other one:

She's Delirium, my favorite character from Neil's The Sandman series. She's the reason for my username, obviously. :)

About my libraryIt's still a work in progress. Basically, it's just a virtual shelf to keep track of my various dictionaries and books on language, but also my ever growing collection of books by Douglas Adams, Neil Gaiman, Stephen King & Terry Pratchett. :-) Currently readingThe Second Sex by Simone de Beauvoir
Slayer Slang: A Buffy the Vampire Slayer Lexicon by Michael Adams
Far from the Madding Gerund and Other Dispatches from Language Log by Mark Liberman
The Man Who Tasted Shapes (Bradford Books) by Richard E. Cytowic
1Q84 by Haruki Murakami
A Brief Tour of Human Consciousness: From Impostor Poodles to Purple Numbers by V. S. Ramachandran
show all (6)