HomeGroupsTalkExploreZeitgeist
This site uses cookies to deliver our services, improve performance, for analytics, and (if not signed in) for advertising. By using LibraryThing you acknowledge that you have read and understand our Terms of Service and Privacy Policy. Your use of the site and services is subject to these policies and terms.
FrankensteinsMonster Profile Books Charts & Graphs Reviews Gallery 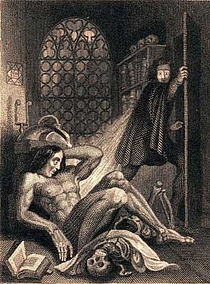 About meThe being commonly known as "Frankenstein's Monster."

The image here is the first published illustration of the monster, from the 1831 edition of Frankenstein.

About my libraryThese are the books the monster mentions to Dr. Frankenstein that he had read, or in the case of Volney's Ruins of Empire, heard read aloud.

"One night, during my accustomed visit to the neighbouring wood, where I collected my own food, and brought home firing for my protectors, I found on the ground a leathern portmanteau, containing several articles of dress and some books. I eagerly seized the prize, and returned with it to my hovel. Fortunately the books were written in the language the elements of which I had acquired at the cottage [French]; they consisted of Paradise Lost, a volume of Plutarch's Lives, and the Sorrows of Werter. The possession of these treasures gave me extreme delight; I now continually studied and exercised my mind upon these histories, whilst my friends were employed in their ordinary occupations."

Of the latter three books, he says, "I cannot describe to you the effect of these books. They produced in me an infinity of new images and feelings, that sometimes raised me to ecstacy, but more frequently sunk me into the lowest dejection."