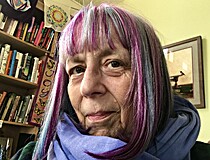 Interests: music (I'm a singer-songwriter/guitarist and play a bit of electric bass; and I sing with a women's choir; I LOVE singing harmony and arranging songs), political activism, photography, organic gardening, writing.

A Glass of Blessings by Barbara Pym

The White Family by Maggie Gee

First completed books of the year, 2011:

2010 reads (click here to see these in my library):
*= Recommend
**=Highly recommend

The Voyage of the Narwhal by Andrea Barrett**
Lark and Termite by Jayne Anne Phillips**
Crampton Hodnet by Barbara Pym**
Possession by A.S. Byatt*
The Girl with No Shadow by Joanne Harris
The Ghost Map by Steven Johnson*

Cloud Atlas by David Mitchell**
Island Beneath the Sea by Isabel Allende**
The Beekeeper's Apprentice by Laurie R. King**
Burmese Lessons by Karen Connelly (DNF)
The Good Daughters by Joyce Maynard
All Passion Spent by Vida Sackville-West**
The Art of Racing in the Rain by Garth Stein**
The Long Song by Andrea Levy
So Brave, Young, and Handsome by Leif Enger**
The Uncommon Reader by Alan Bennett**
Dirt Music by Tim Winton **

Shantaram by Gregory David Roberts**
Great House by Nicole Krauss
The Tower, The Zoo and The Tortoise by Julia Stuart**
We Have Always Lived in the Castle by Shirley Jackson**
Packing for Mars by Mary Roach**
The White Tiger by Aravind Adiga**
Mrs. Miniver by Jan Struther**
Old School by Tobias Wolff**
Bachelor Brothers' Bed and Breakfast by Bill Richardson**

The Good Earth by Pearl Buck**
Wide Sargasso Sea by Jean Rhys
The Siege by Helen Dunmore**
Silk by Alessandro Baricco**
In Other Rooms, Other Wonders by Daniyal Mueenuddin*
The Robber Bride by Margaret Atwood**

January: The Hearts of Horses
February: The Voyage of the Narwhal
March: Cutting for Stone
April: Watermark
May: Remarkable Creatures
June: Lonesome Dove
July: The Voluptuous Delights of Peanut Butter and Jam by Lauren Liebenberg
August: Island Beneath the Sea
September: Shantaram and Packing for Mars
October:Wolf Hall
November: The Siege
December: The Outlander

About my libraryMy LT library is a combination of books I own, books I've read (some in the distant past and can't remember too much about them, other than I liked them a lot or disliked them a lot) and books on my list to read. Welcome, everyone! Some recent visitors stopped by from:

Other favoritesWordstock - Portland's Annual Festival of the Book

Currently readingWild Comfort: The Solace of Nature by Kathleen Dean Moore
The White Family by Maggie Gee
The Practice of Contemplative Photography: Seeing the World with Fresh Eyes by Andy Karr
Full Catastrophe Living: Using the Wisdom of Your Body and Mind to Face Stress, Pain, and Illness by Jon Kabat-Zinn
I Never Saw Another Butterfly by Hana Volavkova
A Surprise Life: The Spiritual Journey of A Girl From Brooklyn by Susan M. Clare
The Zen of creativity : cultivating your artistic life by John Daido Loori
Heart steps : prayers and declarations for a creative life by Julia Cameron
Wench: A Novel by Dolen Perkins-Valdez
Girl, Woman, Other: A Novel (Booker Prize Winner) by Bernardine Evaristo