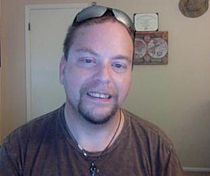 About my libraryMy interests in non-fiction are centered around physics/astronomy, biology, religion, skepticism, history, military history, history of science, philosophy, mind, and mathematics. When I read fiction, it is nearly always fantasy, science fiction, military fiction, and classic literature from authors such as Dickens, Poe, or Shelley.

All the books in my LT library I (and my wife) own personally.

An outline of my ratings:

No Stars: Means nothing, haven't entered it yet.

1/2 Star: Terrible. The worst of the worst. Not enjoyable, poorly written, poorly sourced, and/or just plain sucks. Waste of time to even consider reading. Avoid.

1 Star: Very Bad. Almost certainly not worth the time to read. Avoid.

1 1/2 Stars: Bad. On the whole not worth reading, though possibly of some interest if the author/subject matter are important enough. For non-fiction, there may be highly flawed theories or logic, misleading narrative, or other such sins. Avoid.

2 stars: Fair. Generally not worth the time to read, and suffers some serious problems of narrative, sourcing, argument, and/or just plain bland and uninteresting. Not recommended.

2 1/2 stars: OK. Not a positive experience for the time spent, but has some minor value and may offer some interesting reading if the author/subject are sought after. Not recommended.

3 stars: Average. Nothing terribly wrong with an average book. Generally worth the time to read, but temper expectations. Suffers from some minor problems such as narrative, misleading info, construction, but not enough to avoid reading the book. Recommended to specific readers.

3 1/2: Above average. Worth the time spent reading, and despite having some minor flaws (or being somewhat bland and/or underwhelming), offers enough value/enjoyment for most readers. Some books may have 4-5 star ratings but suffer from problems that keep the rating lower. Recommended to most.

4 stars: Very Good. Well worth the time to read and (for non-fiction) an excellent source of information. It takes something special to get above 4 stars from me, so this is the top of the line for 'normal' books. Recommended to all.

4 1/2 stars: Outstanding. Book offers more value than just being a good read. Narrative is excellent and sourcing/argument (for non-fiction) are well above-average. Subject matter of great interest to me, or subject matter became interesting as a result of reading this book. Highly Recommended.

5 stars: Favorites. The very best of the best. Very Highly Recommended, you can't go wrong with these.

Other favoritesHem of His Garment, Goodwill - Honore and 17th